Some days you are the windshield...

Some days you are the windshield...

and some days you are the bug...

This time it was the Holley fuel injection on the Cobra. The symptoms included hard starting, surging idle speed and a bit of lack of power. I know, how could I tell?

As you may have guessed, the symptoms may have been a bit less, but they were still there. Sigh. Well, I did live up to Mike's title of being the best "parts thrower" he knows.

Then it was time for some problem solving, so the laptop got connected and the first observation was there was no manifold air temperature reading. So, I pulled the connector from the manifold sensor that's been in there for over 15 years and plugged it in to the new throttle body where a new one was provided. Obviously that should solve the problem - NOT!

So the next diagnostic was to check the resistance of each sensor, as they are thermistors - there should be a finite reading across the two terminals. The one in the manifold measured infinite resistance, not good. The one in the throttle body measured very high resistance - about 400K ohms. Probably not good either.

So, off to the internet. Despite my above average search skills (well, I used to do data bases for a living), I could not find what the resistance was supposed to be. That left one alternative: buy a new sensor.

None of the local parts places had the specified AX1 sensor, so I went with an equivalent from NAPA. After determining the NAPA online-order pickup-in-store software on the net didn't work, I went to the store, got a new one and pulled the old one out. Here's the comparison: 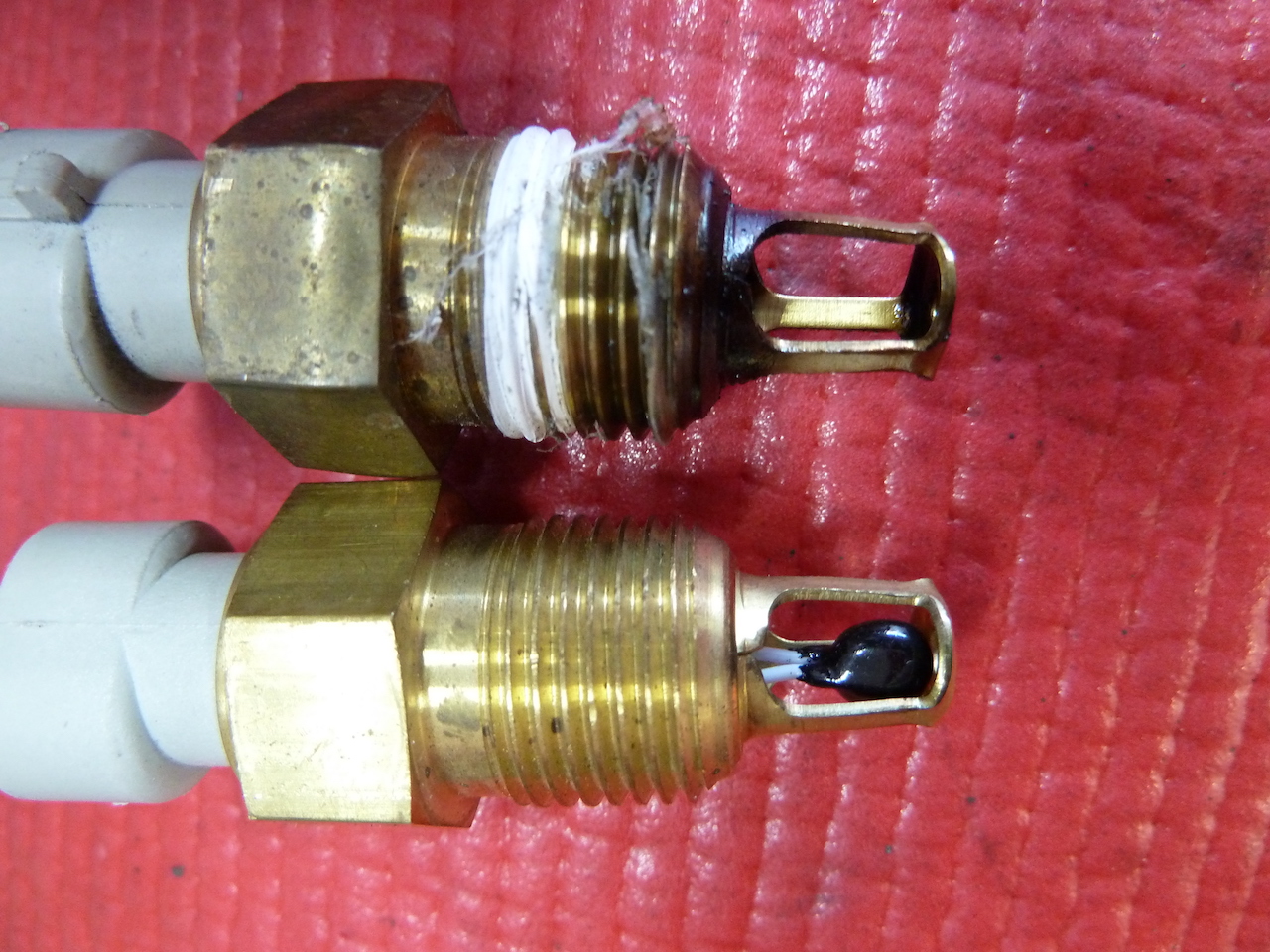 The top one is the one I pulled out. Even I could see the problem - the thermistor was gone...

I did a lot of fishing with two kinds of magnets without retrieving anything from the intake manifold through the sensor hole. All I can hope is that wherever the missing piece is or went, that it will do/did so nondestructively. Pulling the manifold is probably way too late to find any pieces.

Fired the engine, found that the Holley EFI software finally decided to admit the sensor is there and I can see what looks like appropriate temperatures being indicated.

Most of the symptoms don't seem to be there any more. Shortly, maybe tomorrow, I'll take the thing out of the garage and do some more tuning - after reading up on the process - after all, it's been seven years since I did that.

Re: Some days you are the windshield...

Well, I knew that went too easily.

On the first "around the block" test run, a radiator hose blew. Not unexpected since four of the five hoses have been in the car since it was built some 18 or so years ago, including much abuse idling for hours on the street and many track days and 39K+ miles.

Now to find new ones that will fit...
Top

Re: Some days you are the windshield...