We set out Thursday afternoon for the Daytona track to attend the Track Night in America (TNIA). Hardin driving the Zephyr, me with the Cobra in the trailer since it might pour rain on us.

Almost to I95 on US1 (a bit south of Smokin' D's if you know where that is) my phone rang. I don't answer when I'm driving, but I glanced at it to see who was calling, and it was Hardin. As I answered, I thought "this can't be good." It wasn't. The Zephyr was laying down a smoke screen a mosquito fogger could be proud of, so we pulled into the fruit stand just before I95 and set about diagnosing.

The obvious symptom was that the oil pressure gauge line had rubbed a hole against the firewall and was diligently emptying the oil pan onto the driver's side header. Some discussion, speculation and nervously glancing at the time followed.

Shortly we concluded we didn't have the parts, the tools or the time to repair the line, so I decided to leave it at the fruit stand and continue to the track with the Cobra in tow. The person operating the stand readily agreed to let us leave the car in his parking lot over night and even had us put it in a parking spot covered by his security camera.

The rest of the day went perfectly - Hardin got in three sessions in the Cobra, getting quicker each time and seemingly had a ball. Here are a couple of stills of the car; I'll try to link the videos. The event was very well run, the weather was perfect - overcast so it was tolerable in the open, and no rain!

I recommend the TNIA Novice class for anyone who wants to try out their car on a real track, especially if it's for the first time. Everyone I talked with during the event had only good things to say about it. Quite a few drivers were there for the first time, and all seemed to enjoy the experience. By the way, if it does come back, register right away! Mike waited a day too long and was told it was already filled up. 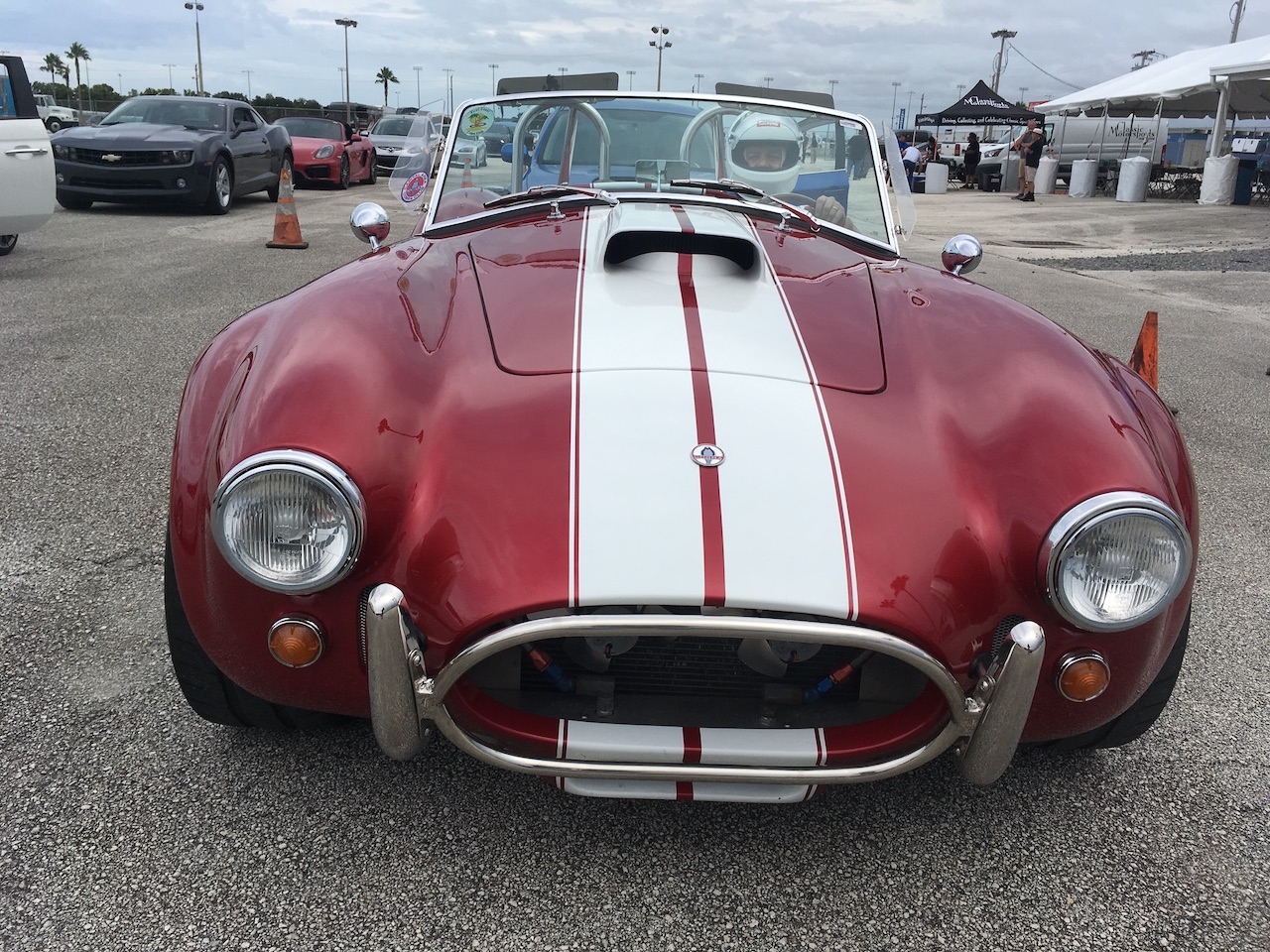 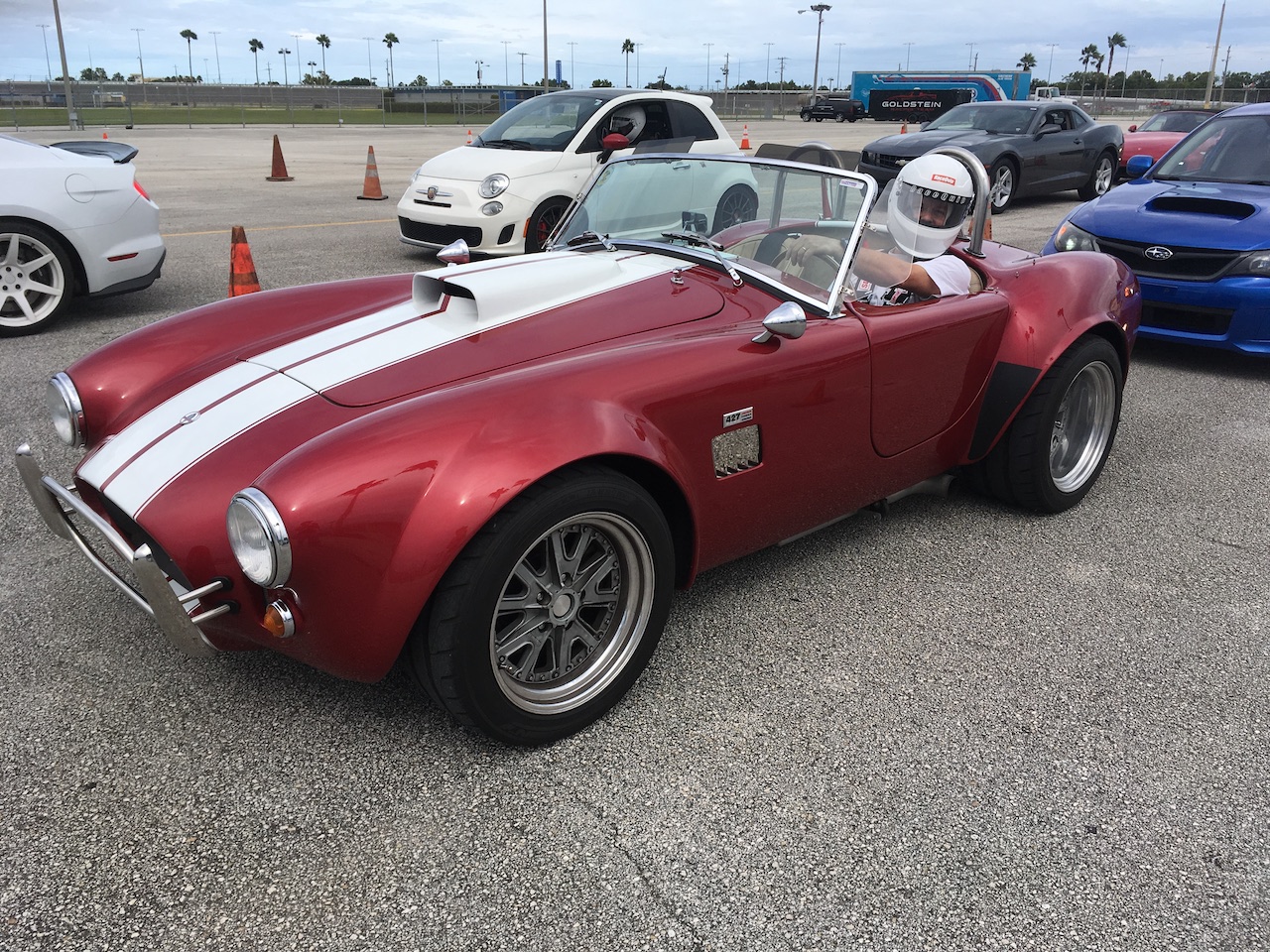 If I can get the videos onto Youtube or somewhere, I'll put the links in a subsequent message.

For the rest of the story (worst of times) about the Zephyr, I'll put a separate thread in the Non Cobra Stuff.
Top

Here are four iPhone videos I took during the day.

First, idling in the staging area:

On the high bank between NASCAR turns 3&4:

Going through the U in the infield part of the course:

Passing a Mustang in the U:

Yes, next time this opportunity presents itself, I definitely won't hesitate to sign up ASAP! I'm still PO'd at myself for getting closed out...

Btw, where's the vid of Hardin's near off road excursion heading into the bus stop? That was cringe-worthy! Have you checked the driver's seat for cheek-pucker effect?

As soon as we can figure out how to give him the appropriate credit, we plan to get his videos posted - or linked - whatever works - we'll do that.

No video or data. My camera mount must have caught yours' disease - it wouldn't adhere to the windshield and I ran out of time to try more options.

Here's a video provided by Thomas Stone, Subaru pilot who was just behind Hardin for the session:

That was fun to watch until Hardin ruined it with the slide...