Their rules allow for a pit crew, so if anyone has enough loss of sanity to want to do this, let me know. I'll need to get a firm idea so I can put the name(s) on the list for their free pit passes. I know at least four are allowed, maybe a couple more.

I plan to take the Zephyr, so if they let me run more than one session I will probably buy a lottery ticket 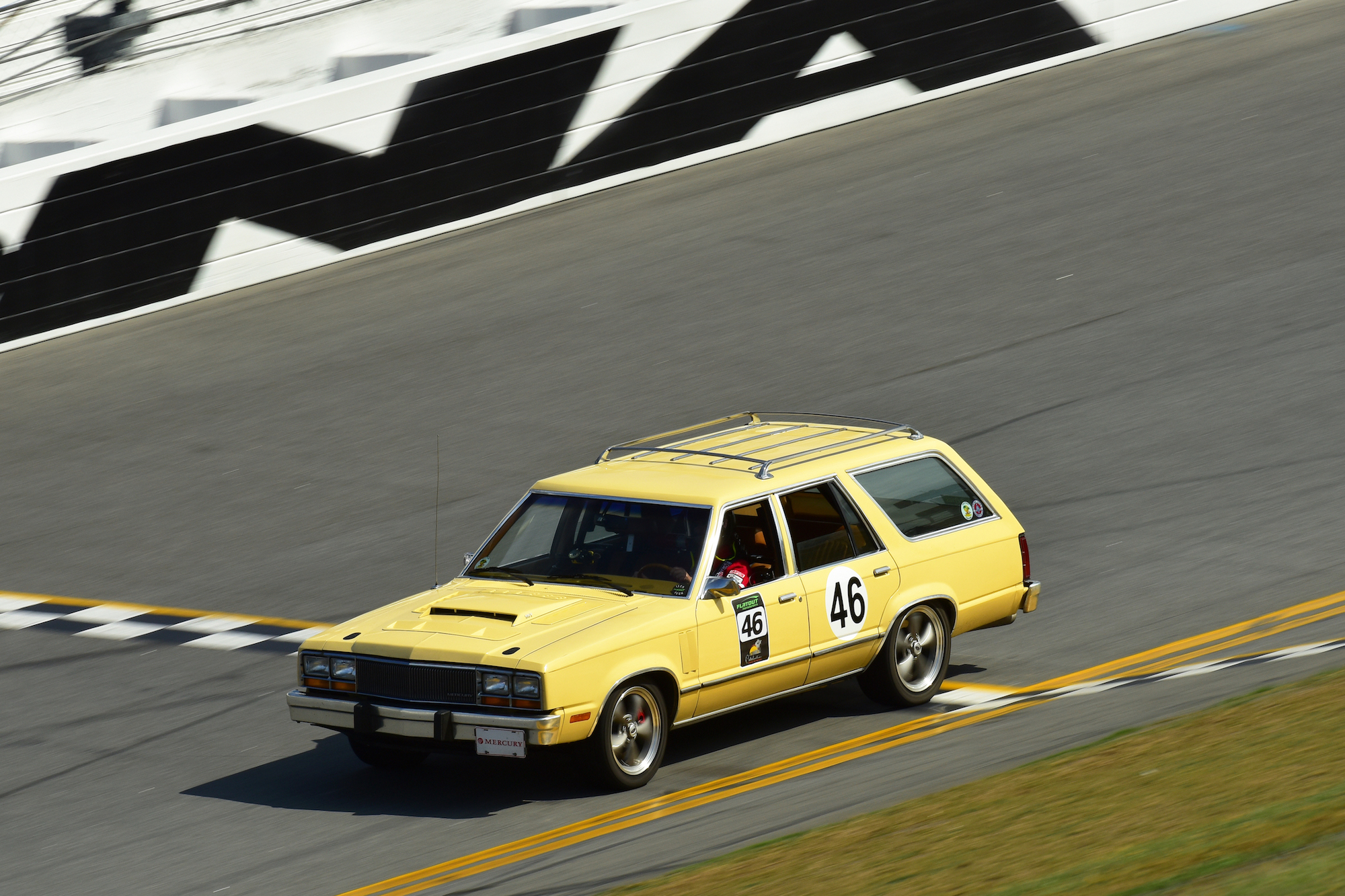 Sounds like awesome fun! Keep it between the lines!
Top

Went to Daytona in the wagon and ran one session. Afterward, didn't like the water temp at 220, oil pressure below 30 and loud metallic noise during turn six, so opted not to run more sessions.

Good news is it ran 133mph, and I had a ball, and it went home under its own power with no noises, good oil pressure and temp.

Mike may have diagnosed the noise as related to the E-brake cables, so I'll conduct a post-mortem this week and see if I can verify.

Meantime, here's the photo with the Saint Augustine Record paper (thanks Mike & Kay): 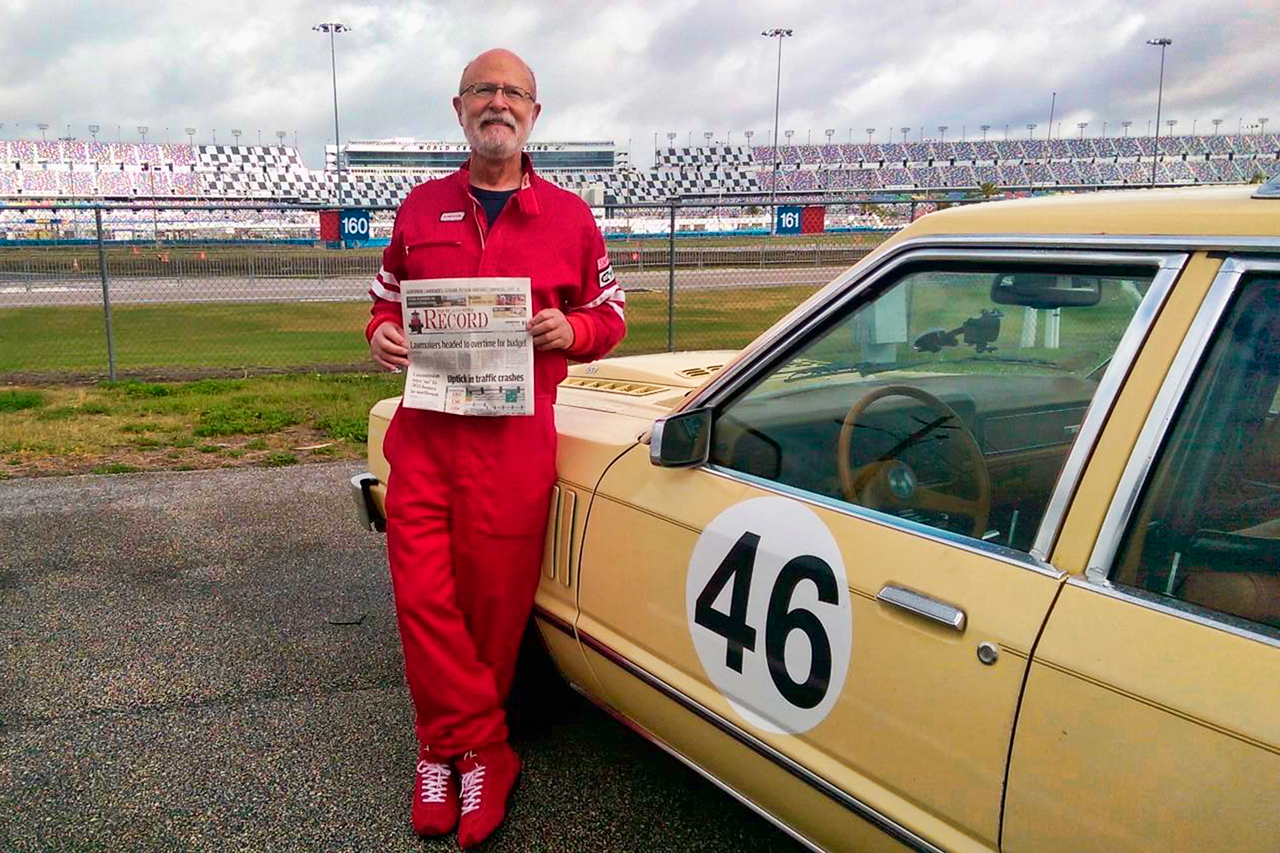 I have a bunch of in-car video that I will try to put on youtube later, and add a link here when I do.

Big thanks to Mike, Tony and Gary for being the best pit crew in Daytona yesterday!

Here's the link to the video for Lap 2, about 3 minutes worth: https://youtu.be/MMSxSrVKAaw

I have the whole thing, but at 22 minutes it would be boring to anyone else but me

Pulling .9 g in the corner...that's amazing in the Banana on those tires!

BTW, is the low oil pressure possibly due to oil starvation in the hard corners? Even if you have a road race oil pan with baffles, sometimes not enough oil gets back to the pan in hard corners. I had that problem in the Mustang until I overfilled the oil for track events.
Top

I was running Kumho V710 racing slicks. I did notice yesterday when I put the street tires back on that the wear patterns on the slicks front and rear were not out to the full width of the tread, much less the little arrows just over the shoulders. I measured 3/4" at each side that wasn't worn at all, meaning there was another 1-1/2" available; another way to say this is that out of 9-1/2" of available tread width, I only used 8". Next time out I will drop the pressures from 30psi to 28psi and see if that gets the full width in contact with the road. If so, maybe I can get to the magic 1G

As to oil pressure, it was below 30psi even when revving the engine back in the pit area. At idle it was only about 10psi. After the engine cooled it came back up to normal, causing a huge sigh of relief. The Canton "Road Race" pan on the 460 is a joke - it does nothing to prevent oil pressure loss in the turns - probably worse than the stock pan. The car has an Accusump which I discovered I'd forgotten to turn on.

Possibly the engine oil pressure reduction was related to the water temp which went to 220F - I don't have an oil temp gauge. After it cooled a little, it was OK.

I'm going to drain, flush and refill the cooling system. I use "hyper lube Super Coolant" in the Fluidyne aluminum radiator which seems to help a lot on the street, like maybe 15-20 degrees, but which ages out apparently in less than a year.

The trans temp was also high, so I'll need to make sure it has enough fluid - if it isn't full, it can foam a bit and its temp goes up.

This was a conversation on Facebook between me and a friend who was working a corner at the race;

Earl Sault : Did you see a pale yellow grocery getter Ford station wagon on the track it belongs to a buddy of mine from Saint Augustine that also has a cobra
Reply · May 6 at 6:10pm

Lee Smits : Yes!!!!! That was the talk of the track yesterday! Was fun watching him hold his own against some of the Corvettes!
Reply · May 6 at 7:19pm

Fun day. What were you using to get the speed and "g" data.
Top

Fun day. What were you using to get the speed and "g" data.
Top

I used Harold Schlangmann's iPhone app called Laptimer on my iPhone SE. It was stuck to the inside of the windshield with a big suction cup. The g-force was taken from the phone's accelerometer and the speed was from its gps.

Fun is the correct description!