I'm in the middle of trying to correct some severe corrosion around the battery and the positive battery terminal on Kay's car. Here's one of the problems (guess which is the new one 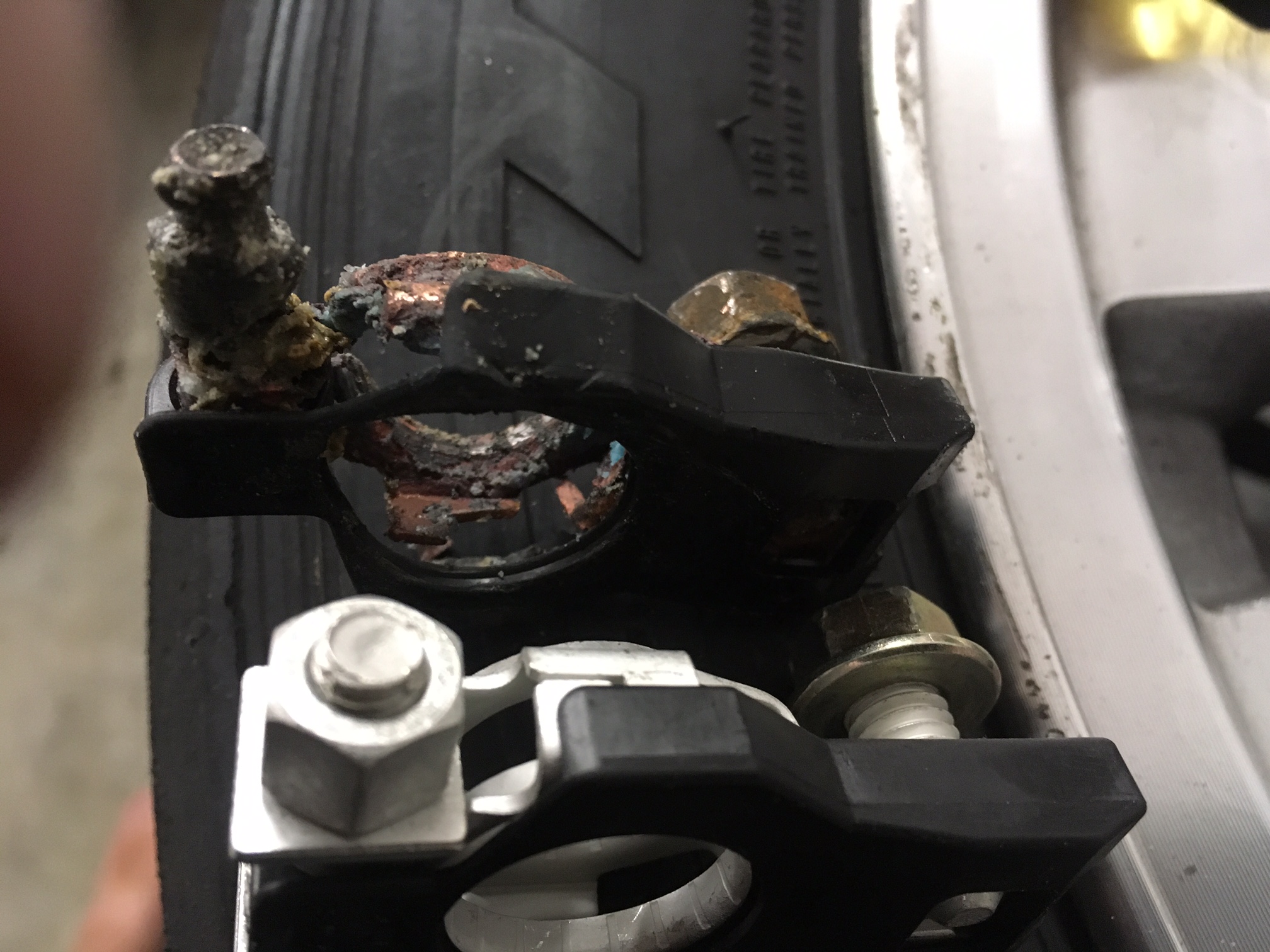 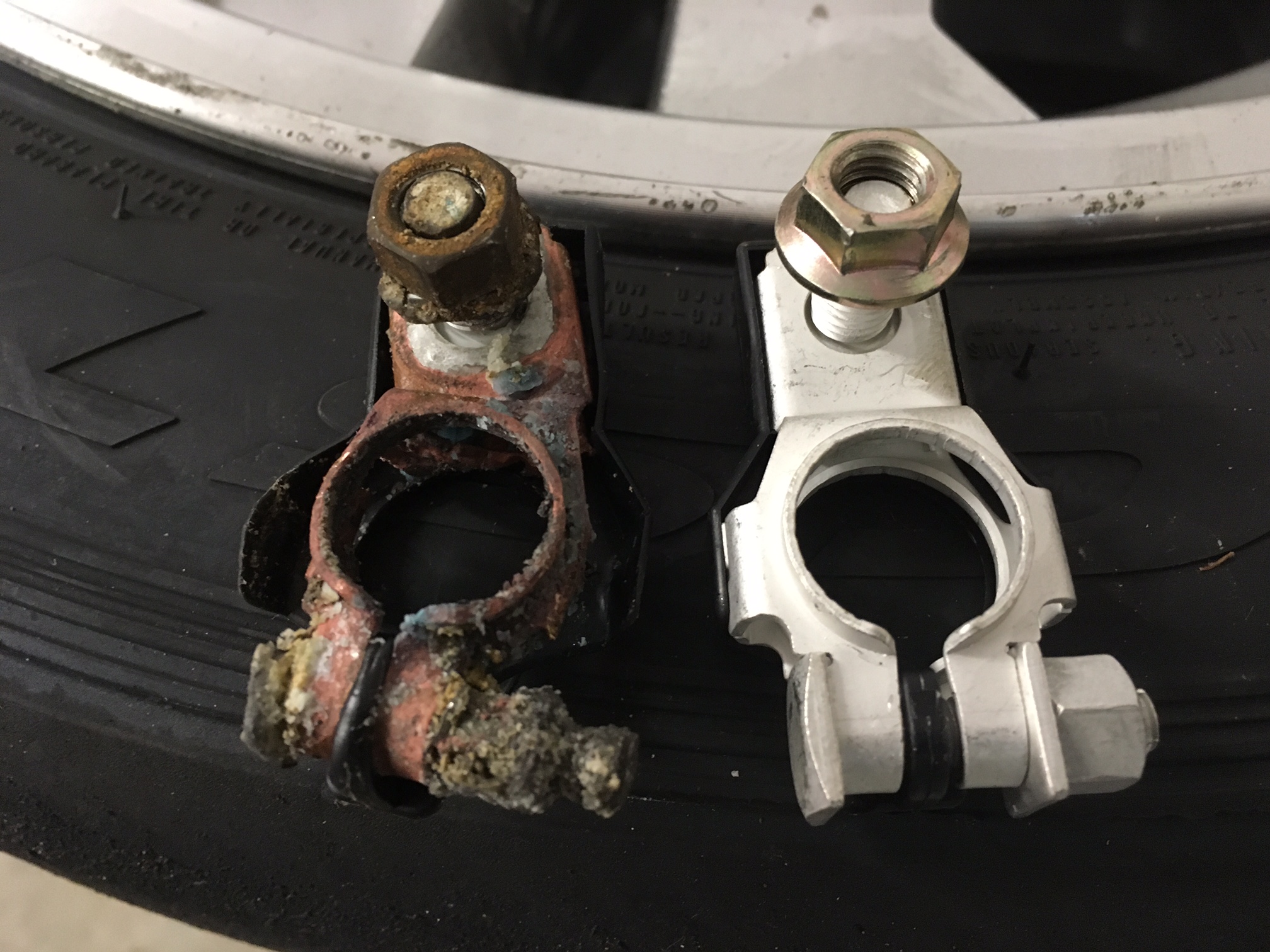 
It wouldn't be so bad if the car was 10 or 12 years old. It's Kay's 2015 xTerra. That's right, Nissans can eat their electrical systems in two years. Kinda makes you think they may have used one of Takata's airbag designers for this connection.

Now I find out they don't have a replacement battery holddown clamp any more - discontinued - so tomorrow it's off to find a generic which can't be any worse. Probably.

I'm also replacing the fusible link holder "just because", plus I really don't want to buy a new computer. Interestingly the ground cable had a little corrosion but cleaned up OK for reuse.

Baking soda did a good job - found places over, under, around and through the battery holder that had some corrosion. Derusto spray can got a workout after i dried it off.

I think the lead-acid battery leaked around the little vent caps and caused the problem; I found it by looking at the battery area while I was filling up the windshield washer fluid. The car is supposedly still under warranty but not going to add insult to injury by taking it to the dealer.

The internet abounds with examples of the same corrosion on Nissans of all models, going back in some cases over ten years. Nissan chooses to ignore this problem, although it got bad enough at one point they did actually recall a few cars. They still haven't changed their setup so others will continue to experience the severe battery terminal corrosion.

In a few cases, the rot progressed far enough to destroy the car's computer. What a bunch of tooth fairies (insert your own epithet here).

I'm going back with an Optima battery so no leakage will occur, NoCo pads under each terminal and much grease to protect the other parts. I did this with Kay's prior xTerra several years ago and as of yesterday it is still fine.

Looks like a mess Tom. Check the battery almost every time I see that much damage the battery has sprung a leak. My "New" used car I got for Janice had the same problem...lucky I saw it at the dealership and they replaced the battery.

Tom, look familiar? Truck began to turn over sluggishly the past few days, figured I ought to check things out...

Was able to get everything apart without destroying anything, cleaned it up with baking soda and reassembled. Coated everything with dielectric grease again, should be okay for now. 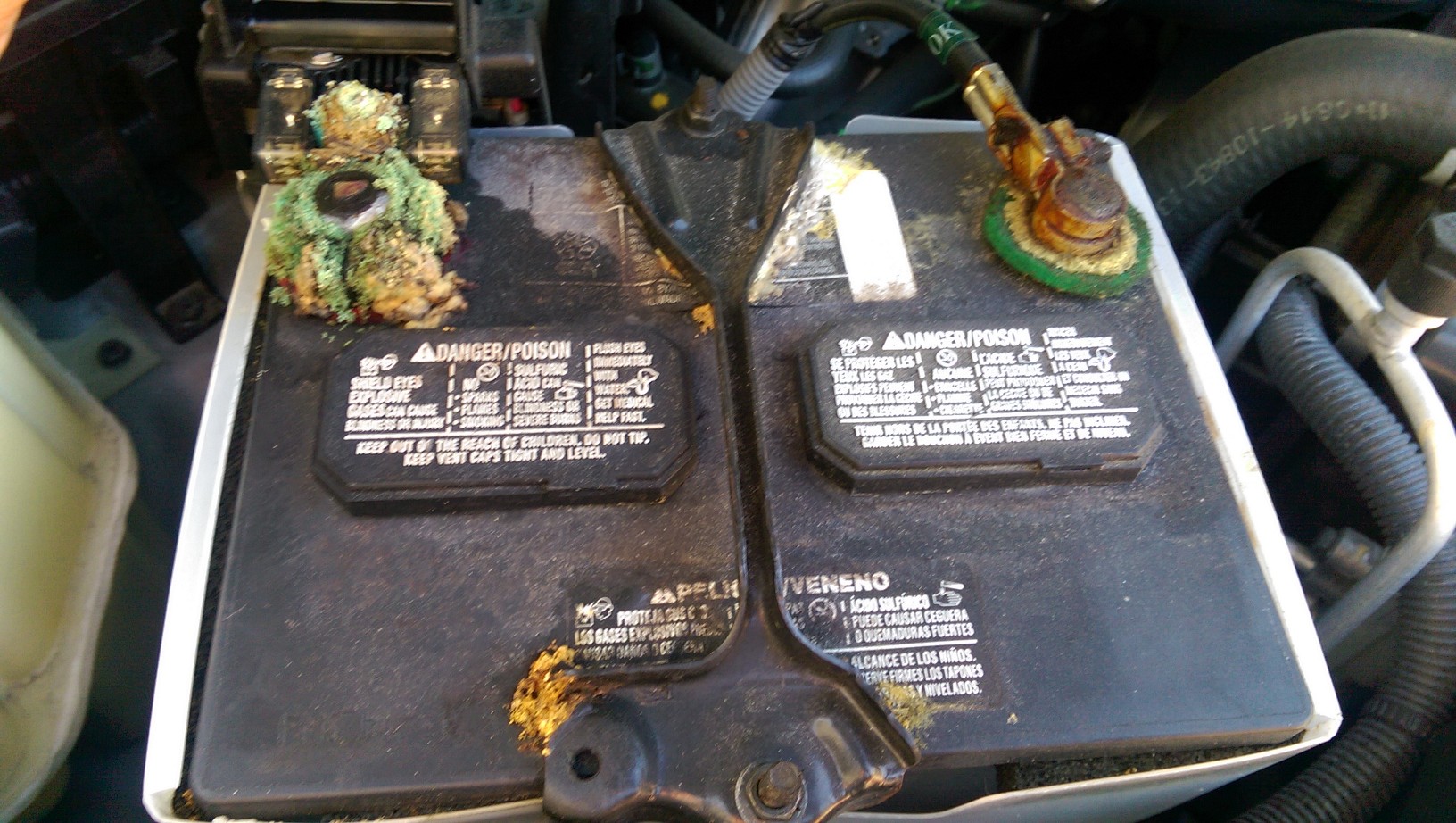 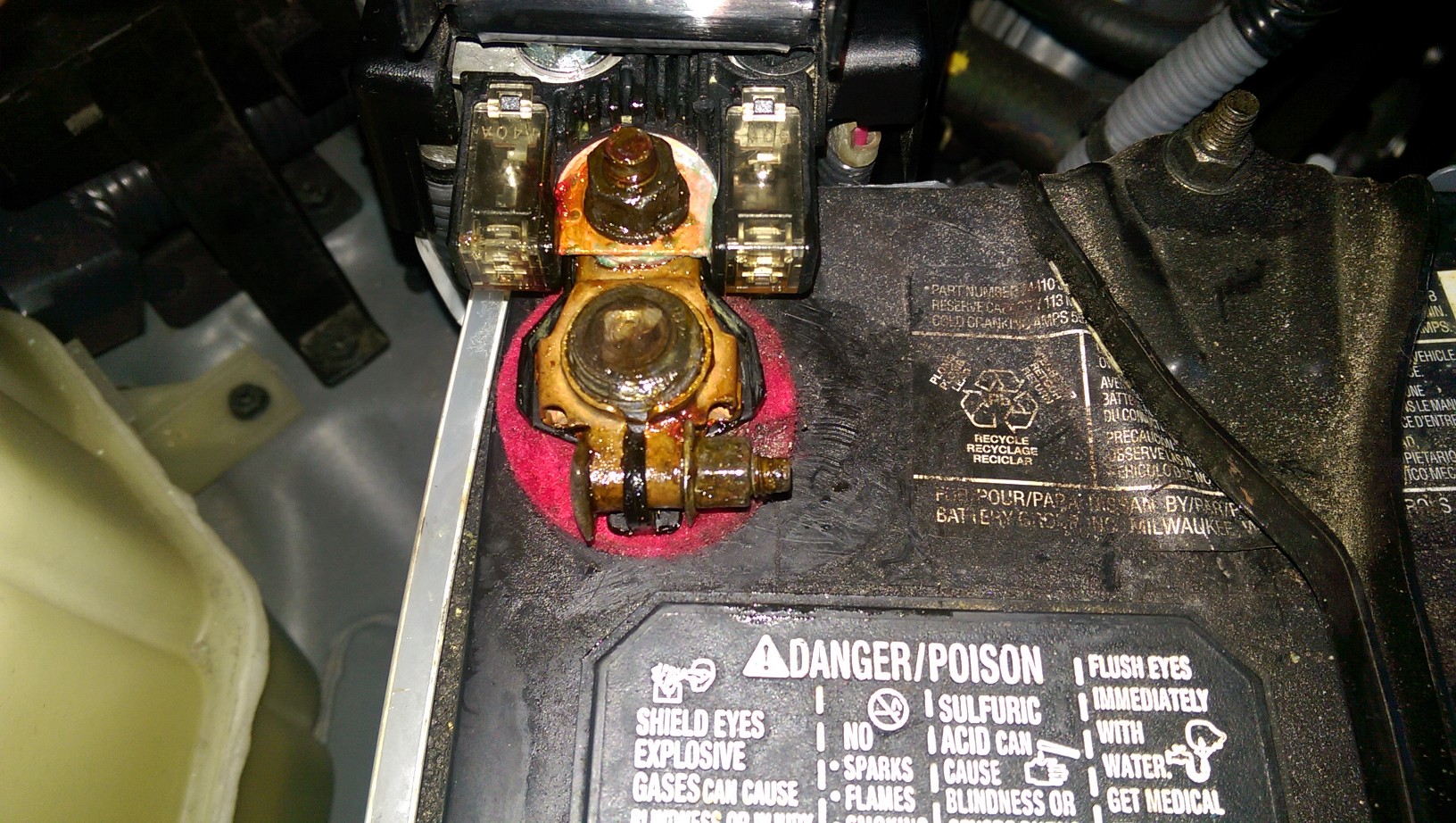 Welcome to the NBCC (Nissan Battery Corrosion Club)! It has hundreds of thousands of members, and very, very few have ever been repaired or recalled under warranty. I wonder how they get away with that? Maybe they know who to pay off? Dunno...

I changed to an Optima battery at the same time. I am guessing the original batteries cause the problem by oozing acid as they age, destroying the terminals and the battery hold down pieces.

I did the same repair with Kay's 2008 xTerra several years ago; I re-checked it when the 2015 xTerra had its problem, and no signs of corrosion. I did have to bully the local parts store that sold that one to me - the first Optima failed within a month or two. No problem since.

Watch that original battery carefully - it may eat its terminals again, and this time it will happen sooner.

EDIT: In looking at your photos, it seems the original terminals had NOCO rings already under them? If so, how did the rot progress so much?
Top

Yep, had the same issue with my '08 Frontier. Figured I could get out in front of the problem with this one by installing the felt washers under the clamps and coating heavily with dielectric grease, but you can see where that got me. The problem is the cheap-ass batteries they install at the factory. This one is clearly leaking at the post, you can see it has separated from the plastic top cover to the point that the entire post can rotate when a little rotational force is applied. I definitely have to replace the battery asap. I agree it's a known and common problem that they should be held accountable for.
Top
Post Reply
5 posts • Page 1 of 1