Cobra is back in the garage after paint

Cobra is back in the garage after paint

Sadly, I paid for a Beverly Hills paint job, but got a K-Mart quality product.

After Paul took it back and had someone knock off most of the orange peel, it still has more flaws than I can count. I think the most disturbing aspect of the whole job is very poor attention to detail coupled with seemingly amateur paintwork.

Education is never free - some just costs more than others...

I have decided to go with it as-is. More trips to the paint shop probably would not help - they had 5 months to get it done and I don't want to do without it any longer. There was dirt,dust and polish splashed everywhere, inside and out including inside the trunk, the cockpit including the dash and under the hood, poorly aligned trunk stripes, peeling paint in the oil cooler inlet, paint defects here there and everywhere, small and large, still some orange peel at the inner door tops and some on the sides in broad areas. I paid extra for a "cut and buff" to correct the really poor paint and even though it helped some, it is far from a smooth finish - i look at it as an incomplete "lick and a promise" kind of work.

The trunk lid needs realignment. I haven't checked the doors yet but first glance says some needed there too in spite of paying extra for having both doors refitted.

I'm installing the bumpers, lights and trim I removed prior to paint, working from the rear toward the front; the back end is pretty much done. A few more side and middle pieces and I'll tackle the front where there's a lot of stuff to put back on, including a new bumper and headlights which are guaranteed to "bolt right on" I'm sure.

Oh, well, enough grousing. Back to work and then some driving. Pictures to follow.
Top

Here are a few photos of the car as it exists today; still lots of work to do...
Front: 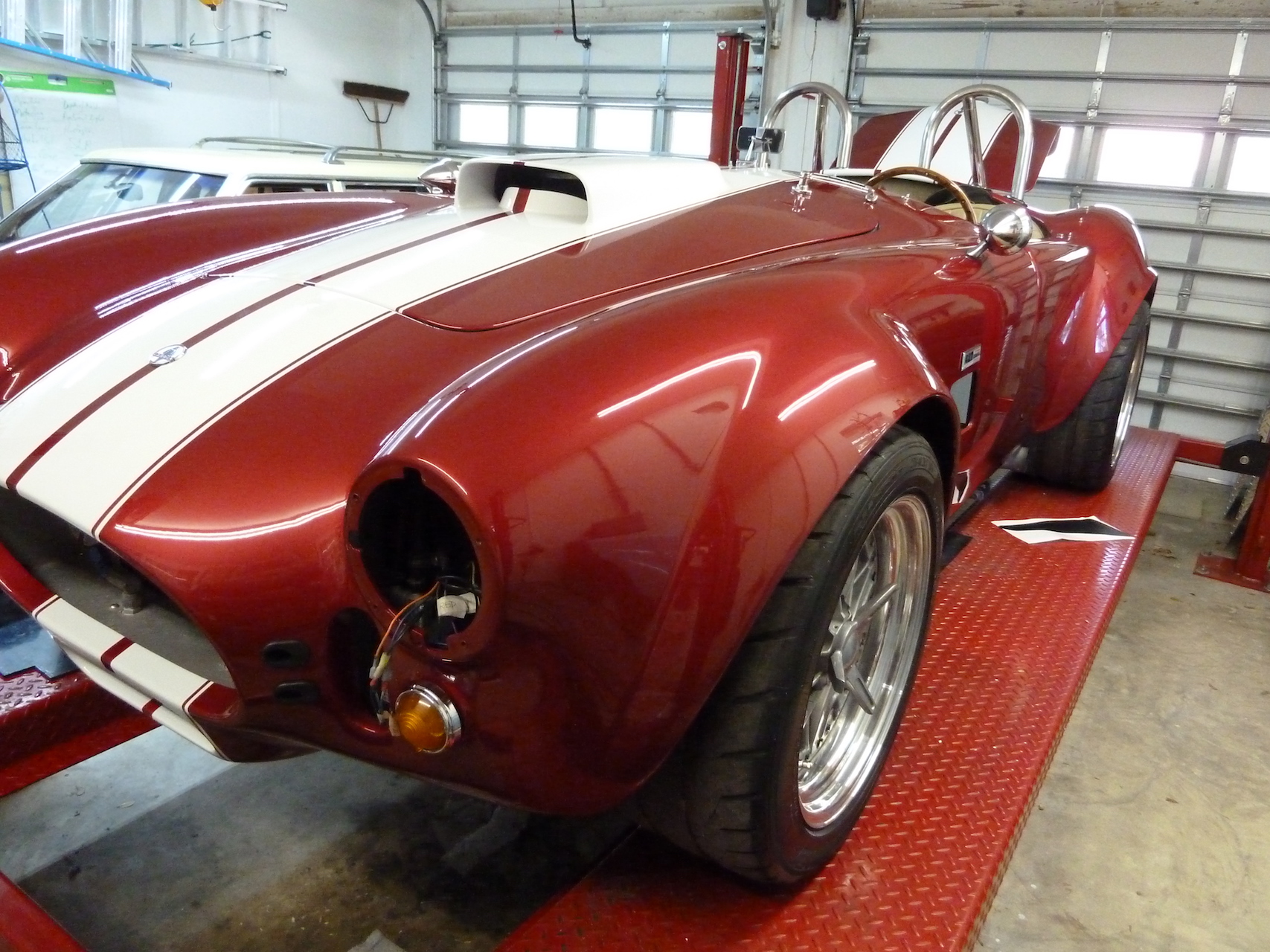 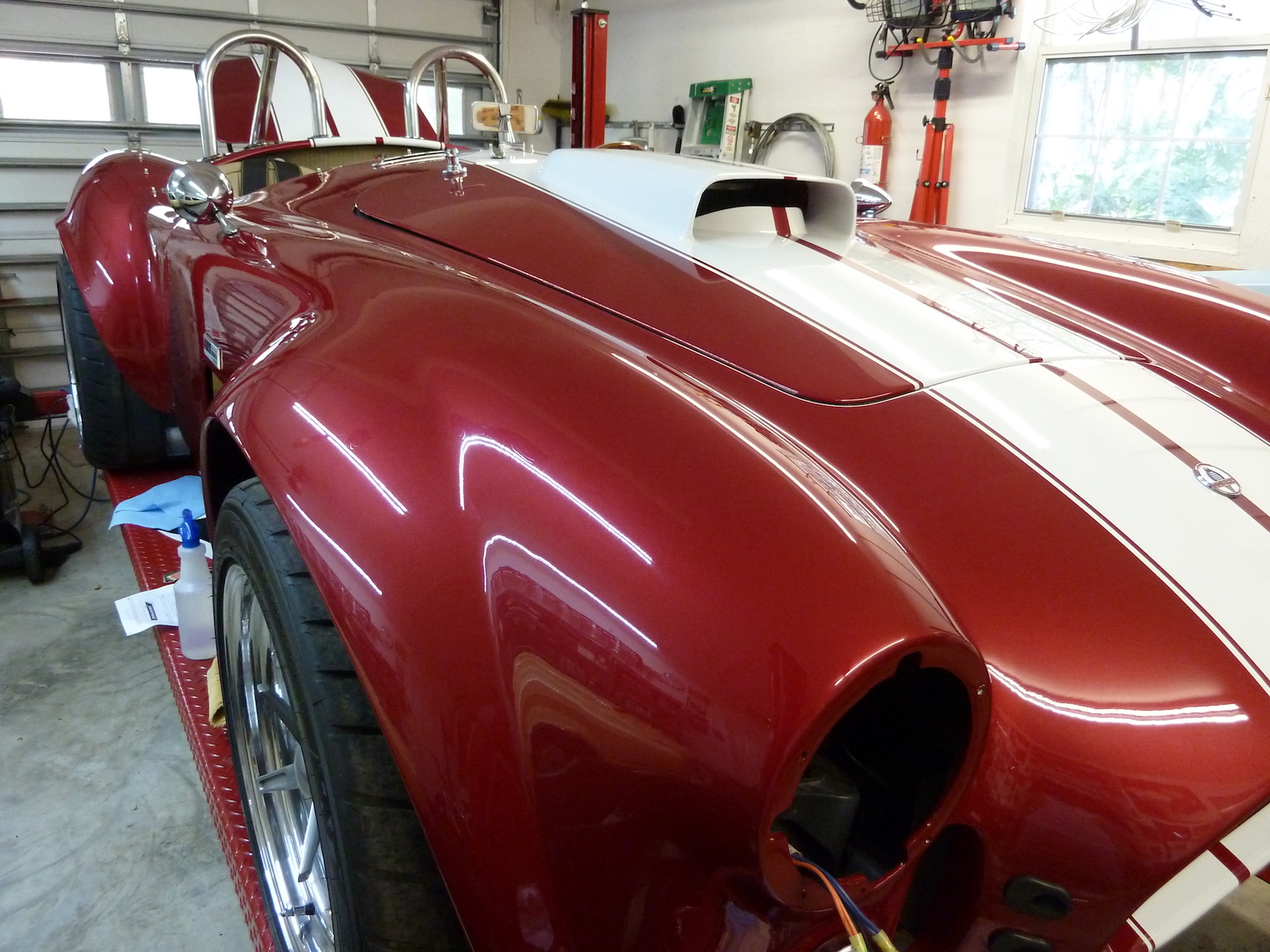 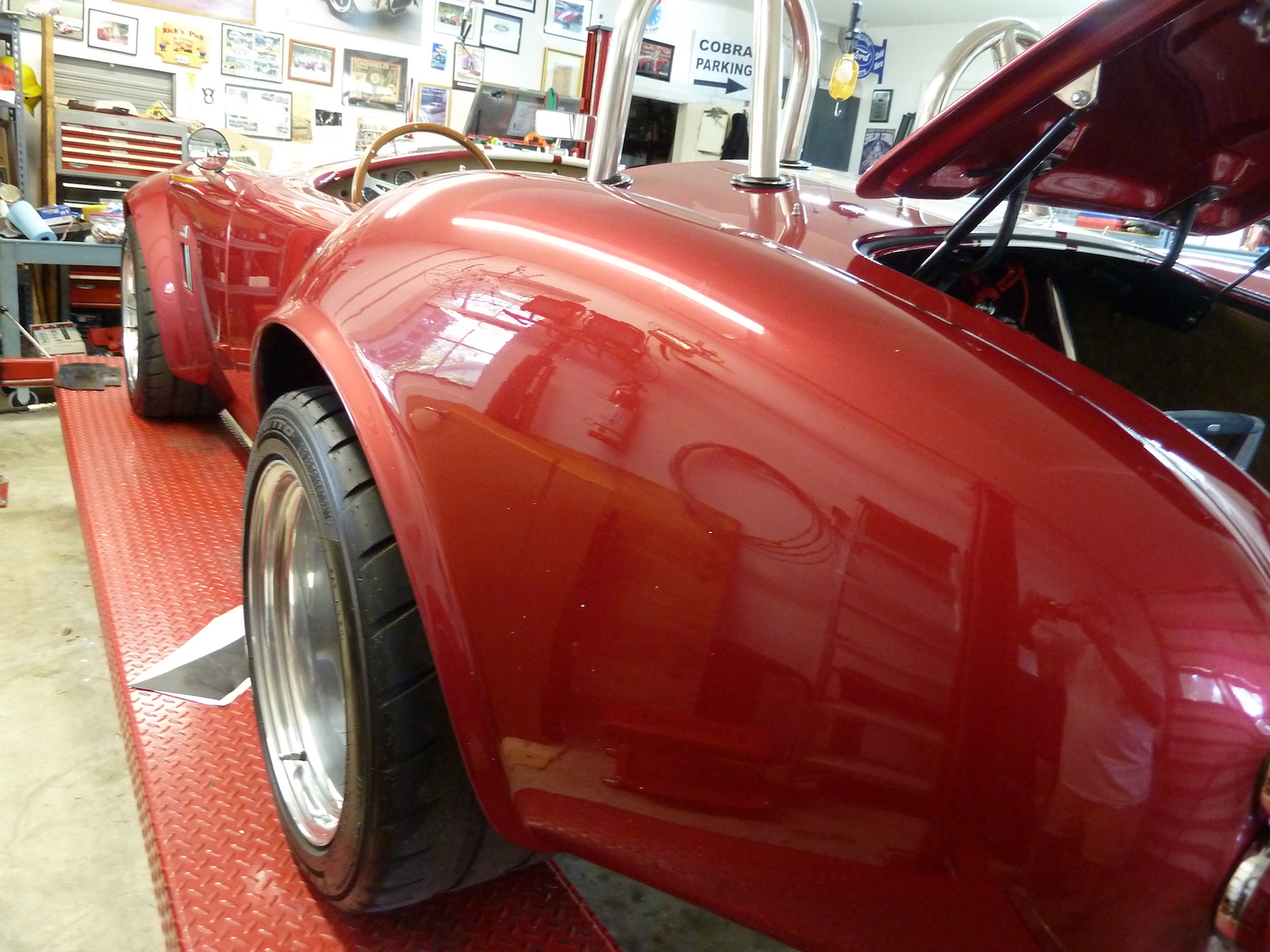 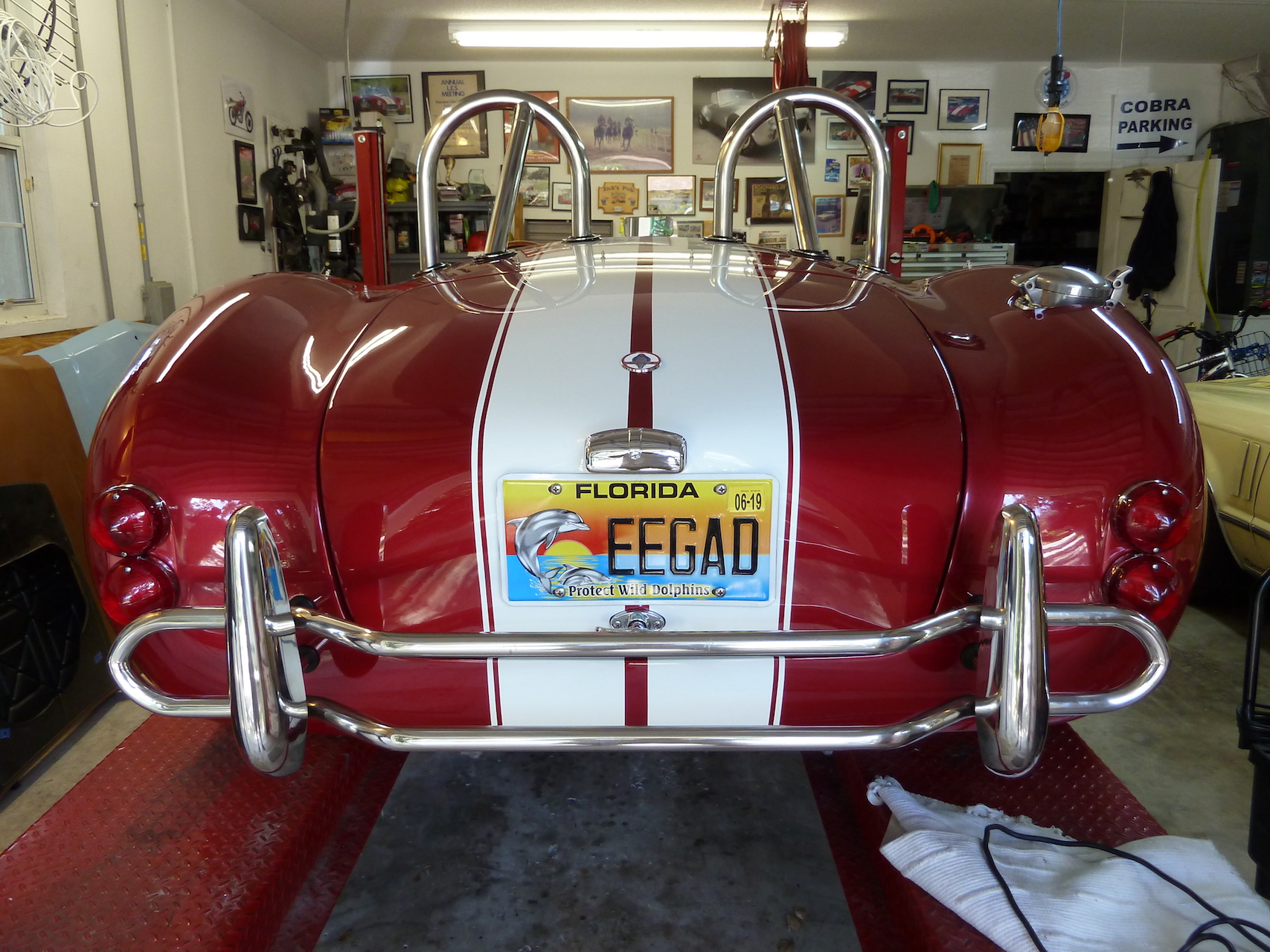 BIG THANKS to Mike, Tony and Ken!

Each of them came by (voluntarily I think) on a different day and helped with different installations. Mike did the wipers and the defroster vents among other things. Tony helped install and debug the parking and brake lights including finding two bad wiring connections (wonder who could have done those? Moi? maybe..) Ken did the doors which needed realignment in spite of paying extra for this to be done at the paint shop - each door had scuffed the paint already. Ken also did the door interior panels and helped get started on the parking lights.

Still on the to-do list is the front bumper (a major "bolts right in" exercise if there ever was one) and the headlights. After that, the windshield.

Still finding things broken by the paint shop requiring fixing including the lip at the rear bottom of the trunk (stripped screws - had to be epoxied, wait overnight, straighten the aluminum angle and reinstall) fishing out the wires from the deck lid where they were pushed inside and nearly impossible to reach much less see, apply Superglue to paint already starting to flake off the oil cooler opening, clean overspray off the aluminum wheels etc etc etc etc

Oh, and I haven't lost my supreme ability for tying my own shoelaces together. It took me nearly two days to figure out that the turn signal lights and the brake lights only work when the key is on

It's an OK 20 foot car. The closer you get, the more obvious the orange peel and other paint defects become. If you look closely at some of the pictures you can see what I mean. Too bad. I do have a new nickname for the car: FRECKLES

I have a new nickname for the painter, but this is a family-oriented web site

It is coming along. I hope within a week or so to be driving again!
Top

Front bumper is on.

External badges (all 4) are on.

Fender vents are on.

It sucks that you got a crappy deal, but it is good to see that you are getting it on the road!
Top

Thanks spl. One of my other mantras is: Education is never free. Some just costs more than others...

It's now back on the road. Several chores remain, but can be done more or less at leisure, such as re-shimming the windshield, applying spats to try to protect the rear fenders. some silicone work around the roll bars and so on and so on. 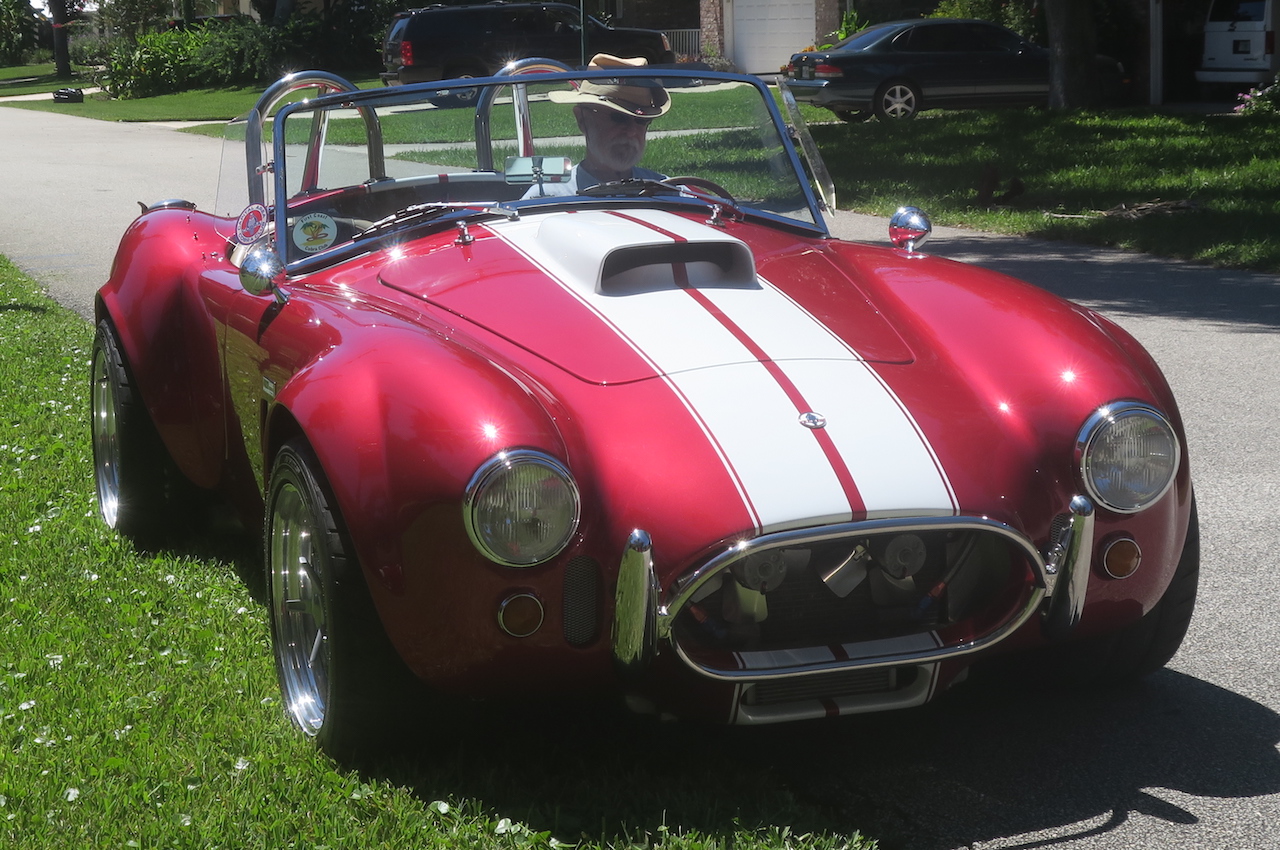 BTW, the painter(???) has moved to Green Cove Springs last I heard, so that makes him your problem

Glad to see that you are back on the road. Sorry to hear of the paint shop woes. It seems to be industry standard.

Are you heading to the Reptile Roundup?
Top

Signed up for the Reptile Roundup. Planning to go there that Thursday afternoon.
Top
Post Reply
7 posts • Page 1 of 1