Well its been too quite here on the forum.
As I was driving in the Reptile roundup cruise I had a fair amount of smoke coming out of my right side pipe. As I had just changed the oil pan to a road race type, I was hoping that maybe I had just over filled it.
So as the saying goes I was whistling past the grave yard.

The compression test was good - 250lbs but oil was starting to drip from the side pipe. So off with the head!!!
Cylinders look ok but there was standing oil on the tops of several pistons. After taking the head, intake manifold, piston and all gaskets to my engine guy that I use for the stuff that I can't do, it appears that the valve stem seals have crawled up the stem. So I pulled the other head and am taking it in also to do a different brand of seals and he is going to set the spring pressures while he is in there.
SO here is a picture of my cobra motor that is not in a state the it should be for this time of year with the cooler temps....but as I keep saying " its all part of the hobby, if I don't have to work in it then all that is left to do is wax the car....and I hate waxing." lol 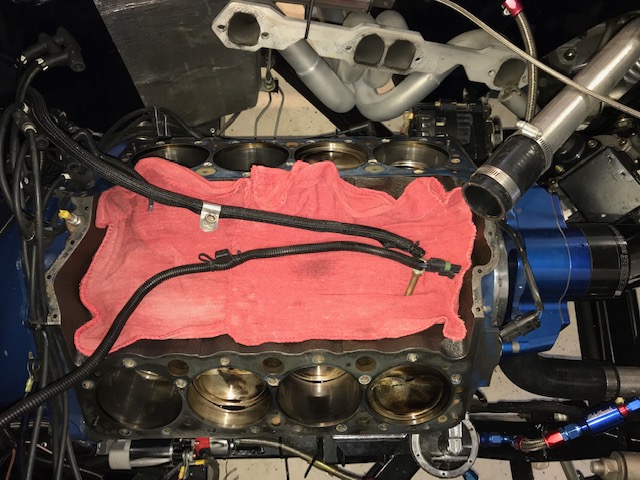 Lest you think you are in the minority in the "shoot yourself in the foot" business, I need to correct that impression.

I took the Cobra's front end apart because after 38K miles the front wheel bearings developed some play, and the brake disks were worn. Any rational human would probably have turned the disks, thrown in some pads and regreased and retightened the bearings. Not I!

First, I did note the shocks seemed to have relaxed, so, using the part number I preserved these 18 years, I ordered new shocks. The result is they were not the same ones that I removed. They are 1" longer. Reasoning (rationalizing?) the suspension had relaxed to the point that the upper A-arms were hitting the inner fender panels, I installed them. Will they make the front end sit too high? Still in the drum roll on that one...

The shocks I removed did have nearly zero internal gas pressure so at least replacing them was a good idea.

Next, I removed the wheel bearings from the hubs, installed the outer cups no problem and set to installing the inner cups. After ruining one hub in my 20-ton press I alertly determined the cups I bought were about 0.030" too large in diameter, and even a 100-ton press wouldn't have made them fit.

I have ordered a new hub from Baer who apparently thinks it is equal in price to its weight in gold. Education is never free...

I haven't even tried to install the new rotors, or the front or rear pads. Oh joy! I can hardly wait.

So for the moment - until the hub comes in and I can start putting things back together - here's what it looks like: 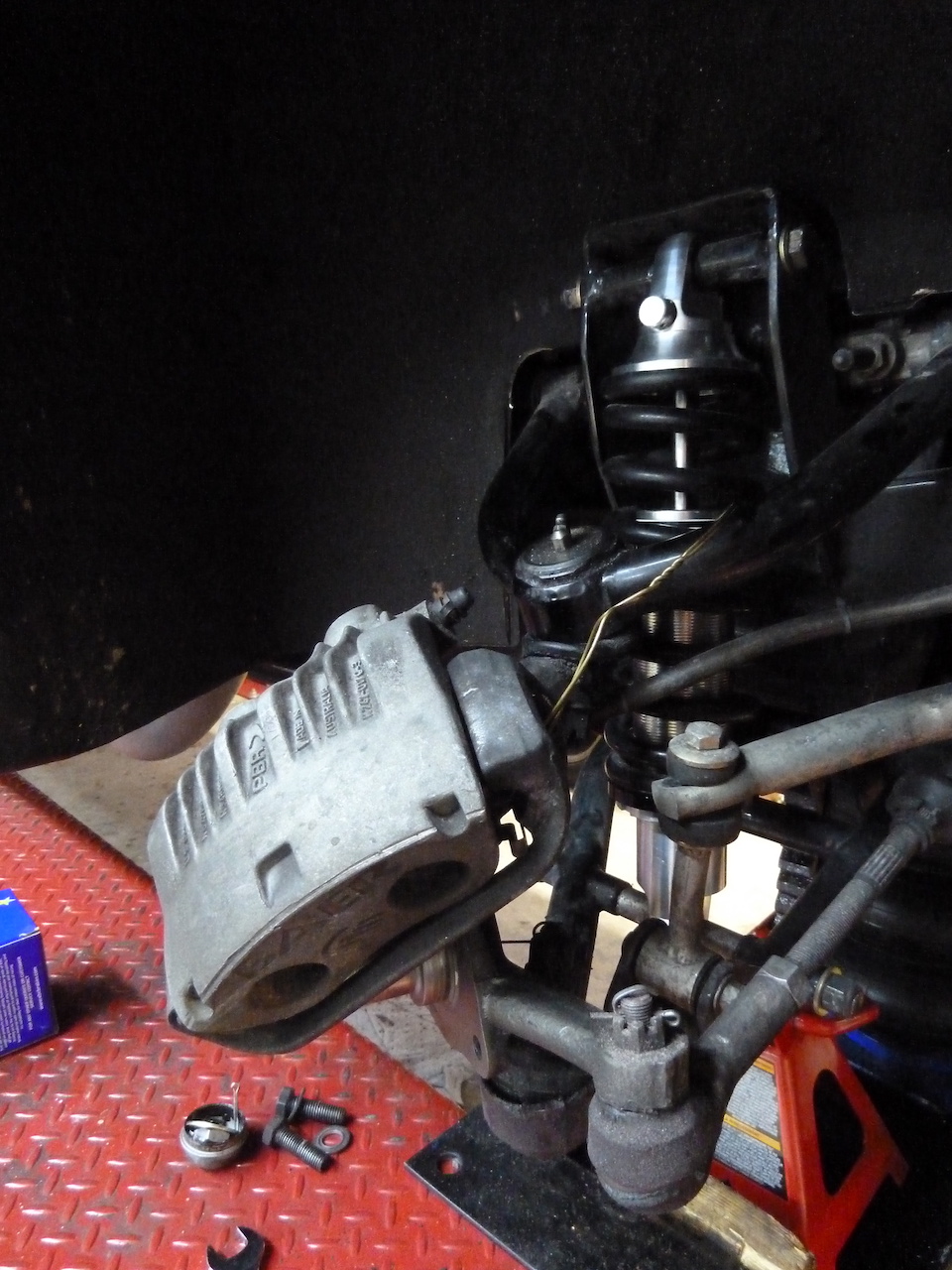 As they say I feel your pain. The longer shocks will not matter unless they bottom out during normal travel at your previous ride height. They might have an o-ring on the shaft to indicate travel. If not a small thin zip tie can be used.

If so the only solution is to raise the ride hight or stronger springs to keep it from compressing as easily.
Tnx for posting I do feel better now.

Well just to keep the story going. I have sort of fit my cylinder head issue into a figurative box. I got a reasonable good price when I bought them used on ebay. I don't remember exactly the price but I think it was around $500 for the pair. Not bad for aluminum 2.02 int. valve heads that had the steam holes that the 400 block needs. And they were Trick Flow so at least a name brand. The first issue after I got them is that they are a "twisted wedge" head where the intake valves are canted like a big block Chevy. This caused the need to buy special rockers for the intake. And they cost almost as much for 8 as the 16 I bought before I found about the need for the special rockers. Trick Flow had discontinued this head so support is minimal. Do to the canted valves I also could not buy pushrod guide plates in the shape needed so I had to cut the normal ones in half and fit and align them during assembly, doable but a pain. Still all was ok for the first motor

Leap to my currant status. The motor was getting lots of oil on the top side of the pistons. So off came the heads and off to the motor shop. It was found that a couple of valve guides are very worn, and the guides have been knurled (so much for used ebay stuff) along with the valve seals climbing up the shafts. They need one guide replaced and the rest bushed with bronze inserts. He also found during the inspection that the valve springs don't have enough pressure. I had spoken with Comp Cams at the turkey rod run and they were to send me the springs, retainers, shims, etc. that I would need for the Thumper Cam...This did not go well as we now know that I was sent springs for the flat tappet cam and not the roller The part number ends in 18. I was sent 81. Now I don't know if someone just transposed the digits or as it turns out, the 18 is for hydraulic rollers and the 81 is hydraulic flat tappet, they just sent the springs for the wrong cam...doesn't matter..still wrong.
This is where the "box" comes in.

The machinist has let me know that there is only about an 80% chance that the valve guide will press out without something breaking in the casting from Trick Flow (they have experience with Trick Flow stuff) and there is a chance that putting bushings in the other guides might blow out and then those would need new guides at the same 80% chance.
If all goes well then the repairs will be around $650. And I will still need to buy springs and cups. So do I put another $850 in these old unsupported heads or go new.
The box I'm in is I need angle plugs because my home made headers will not work with straight plugs, 64cc chambers, and "D" shaped exh. ports, along with steam holes and there are not any heads out there that have all those things...and I will still have to by a half set of rocker arms. I think I can modify my headers to square up the D holes and that will at least give me a couple of heads to choose from and I should be able to get springs with the correct pressure with new heads, negating the having to buy new springs cost.....but all of them are around $1900 all in and will need the steam holes drilled if possible to do so.

So I have to decide to do the repairs now or upgrade.
I've decided to try the repairs. The shop is going to do the guide first to see if it goes ok then go after the bushings if all is ok then I'll order springs and cups....

I hate to put good money into these heads but the box it too tight and I'm in too deep to bail...
Ken
Top

At the risk of getting hit over the head with a used valve guide because I am sure you don't want to hear this, I need to say (again) "if you buy quality, you only cry once."

Been there - probably still there - I'm a notoriously slow learner...

Hate to say this but I'd go for the new stuff. Daytona is hard on parts!

Don't get me wrong, unlike Tom, I'm not too proud to buy and install used parts if I think they're workable. From what you've described though, those heads have disaster written all over them.

Thanks both of you for the input. It has been a tough decision. Ultimately it comes down to budget. I have put a lot of $$ in the motor as a whole these last few months with Accusump, roadrace pan, balancer, and a few other upgrades. On the fixed income play toy budget I having to look at the dollar side of it. I have the budget to do the repair without too much pain or attention from "the one who must be obeyed". I trust the engine builder to stop if things are not looking well before all the big money is spent. Daytona is not for a few months yet so if they die again the Fun fund will have more money in it. 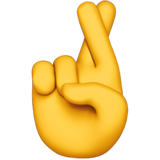 Here's the update on my head repair. Only one guide broke during the bronze bushing upgrade. So with that one and the well worn guide only two had to be replaced. The valve seat pressure is now at 140lbs instead of the 75lbs that the flat tapped springs had that Comp cam had sent me. And a freash valve job of course. The valve seal upgrade went well also, they are confident that they will stay put and not climb the shaft.

Both the owner and his machinest spent time going over the project with me and they feel that this should be a good and long lasting fix. I also got the intake and head gaskets that they use on the engines they build for the local race community.
The head gaskets are made for aluminum heads and don't leave indents in the aluminum like the stock gaskets tend to do. I knew there were special gaskets out there but just could not find them on the O'l internet. I now have part numbers.

While I would have liked to have upgraded to a new set of Brodix heads with larger CC intake ports and 2.05 valves instead of the 2.02 They would have been a little more than double the $$. And as hard as it is to say. I really don't need more HP. The 500 or so is really enough. But if I would have had to get them I could live with it.

If I stay motivated I should have it running this weekend.
Now I have to find my Santa hat. It's in a box somewhere.
Top

As to gaskets, make sure the new ones are not like the old Fel-Pro Print-O-Seals that didn't have any steel shim core, so after a few dozen heat cycles they would creep outward and fail. We ended up calling them Fail-Pro Print-O-Leaks.

Here's an example (one of several different engines/assemblers that are in the file, all with the same problem): 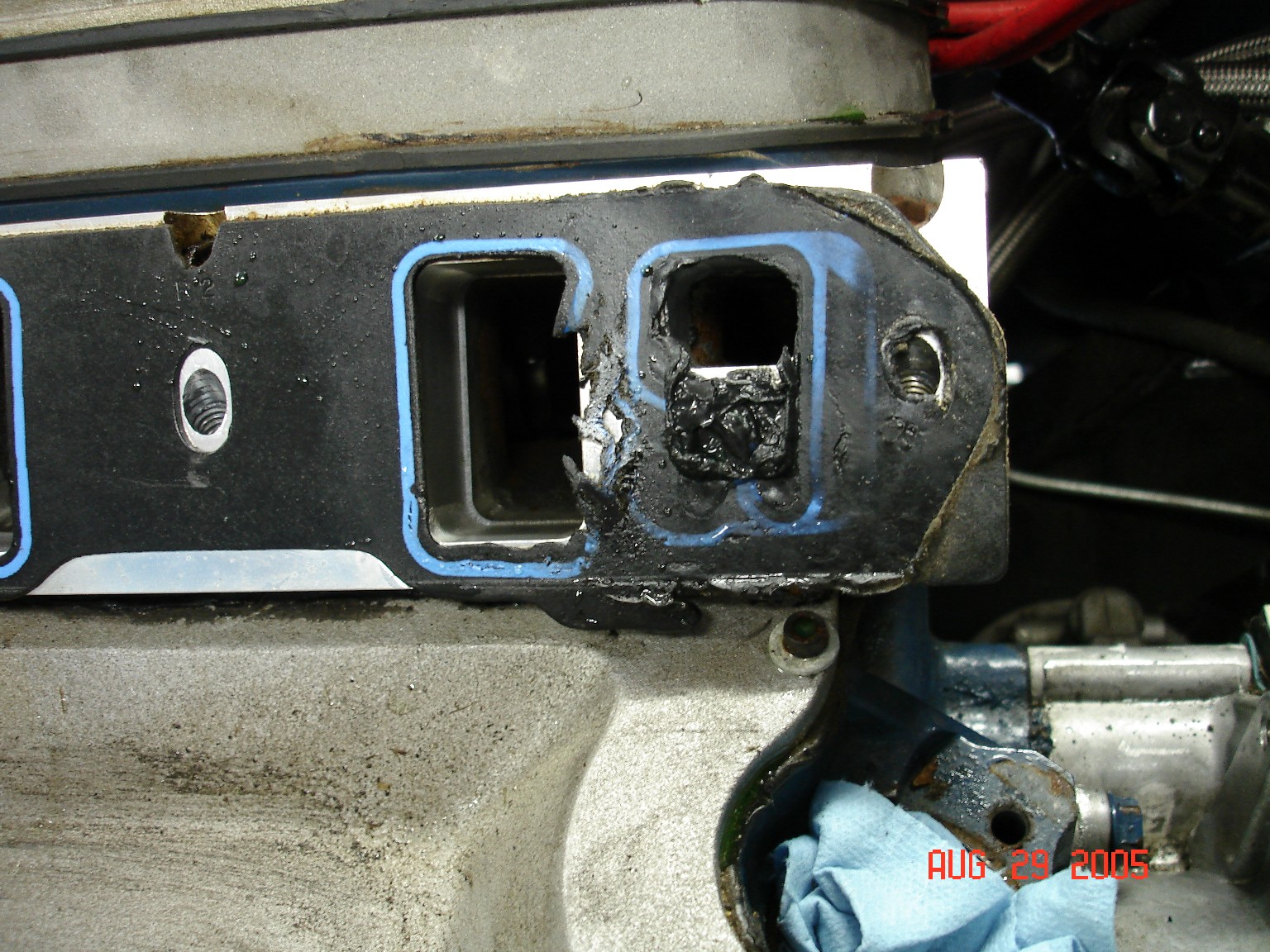 The worst effect of failure was coolant in the oil. It didn't seem to matter if they were used on big (460 or FE) blocks or small blocks. Same result.

Those gaskets were made for and used by racers. The bad news is they did not last very many heat cycles before they crept out of the joint. What the racers did, of course, was to replace them frequently in the course of normal maintenance and so they never ran into the higher number of heat cycles that a street engine experiences.

Some race parts are not usable on the street - those were a case in point.