Tempting for the Zephyr. Anyone else think this might be fun?

Well, I went. And met up with Doug from VA with his baby blue Fairmont wagon.

Almost didn't get to go - I put the key in and turned it. There was a click but nothing else; mind you this was 8AM Friday, my planned departure time. Some rapid diagnosis led to the starter having failed.

Kay reminded me I had another one, so I got it out and saw that it was one I bought 11 years ago for the Cobra. It went in too deep, rubbed the flywheel and gave an enormous, continuous high-pitched squeal. The vendor sent me some shims and I put them in the box, so when I exhumed the starter, there they were! Predictably, they were not the correct shims and didn't come close to fitting.

The top bolt on the starter was last seen probably before I put the engine in, but with some extensions, a u-joint, a flashlight and a few cusswords, the old starter came out: 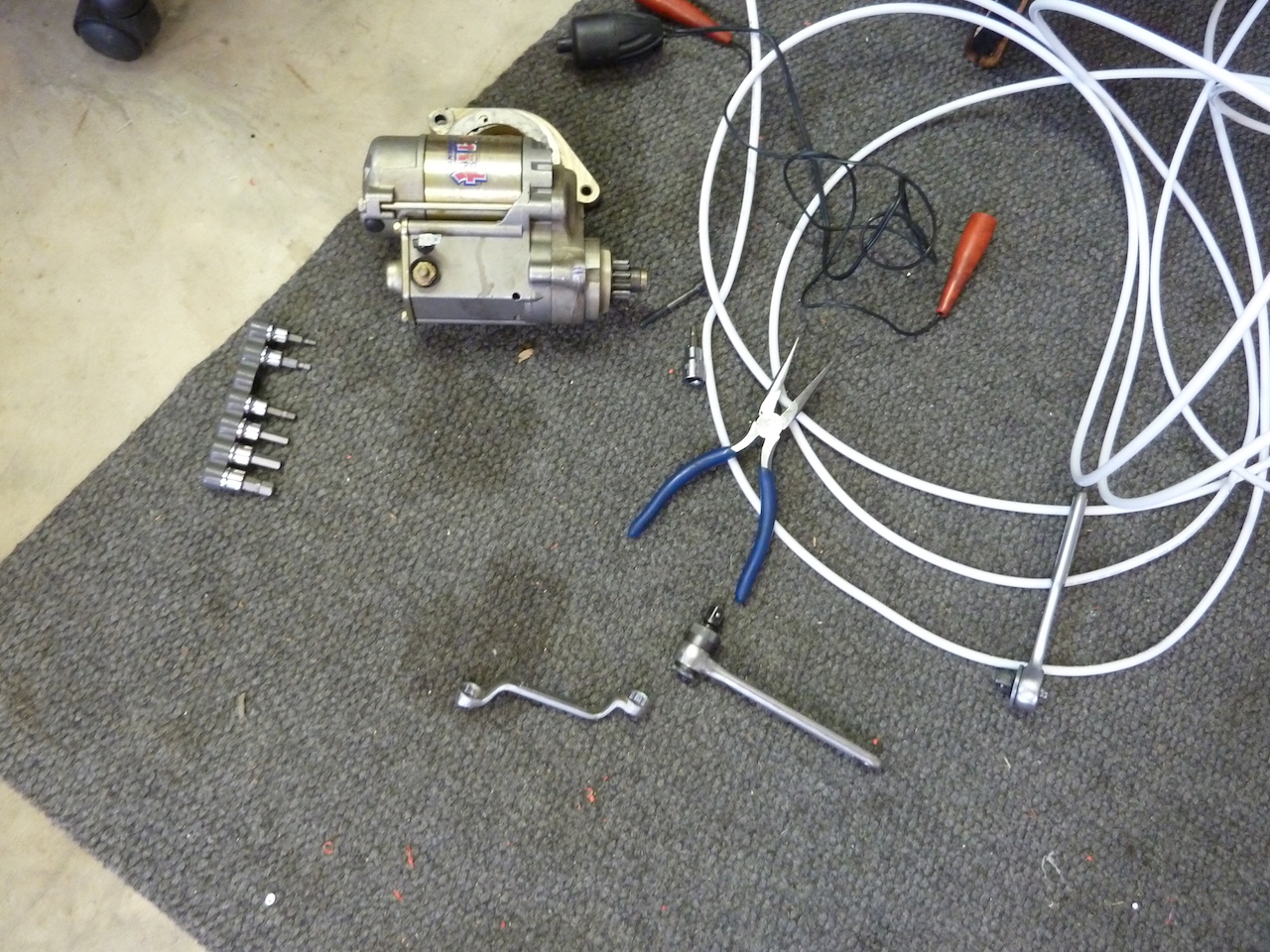 I carried it over to the jump box just to see if it would turn over. It didn't. Instead, it left a trail of rusty water on the floor. I decided that driving home after the track day at Daytona probably did it in, as I had several pretty deep water areas to go through to make it back to the house, mostly around Crescent Beach on A1A: 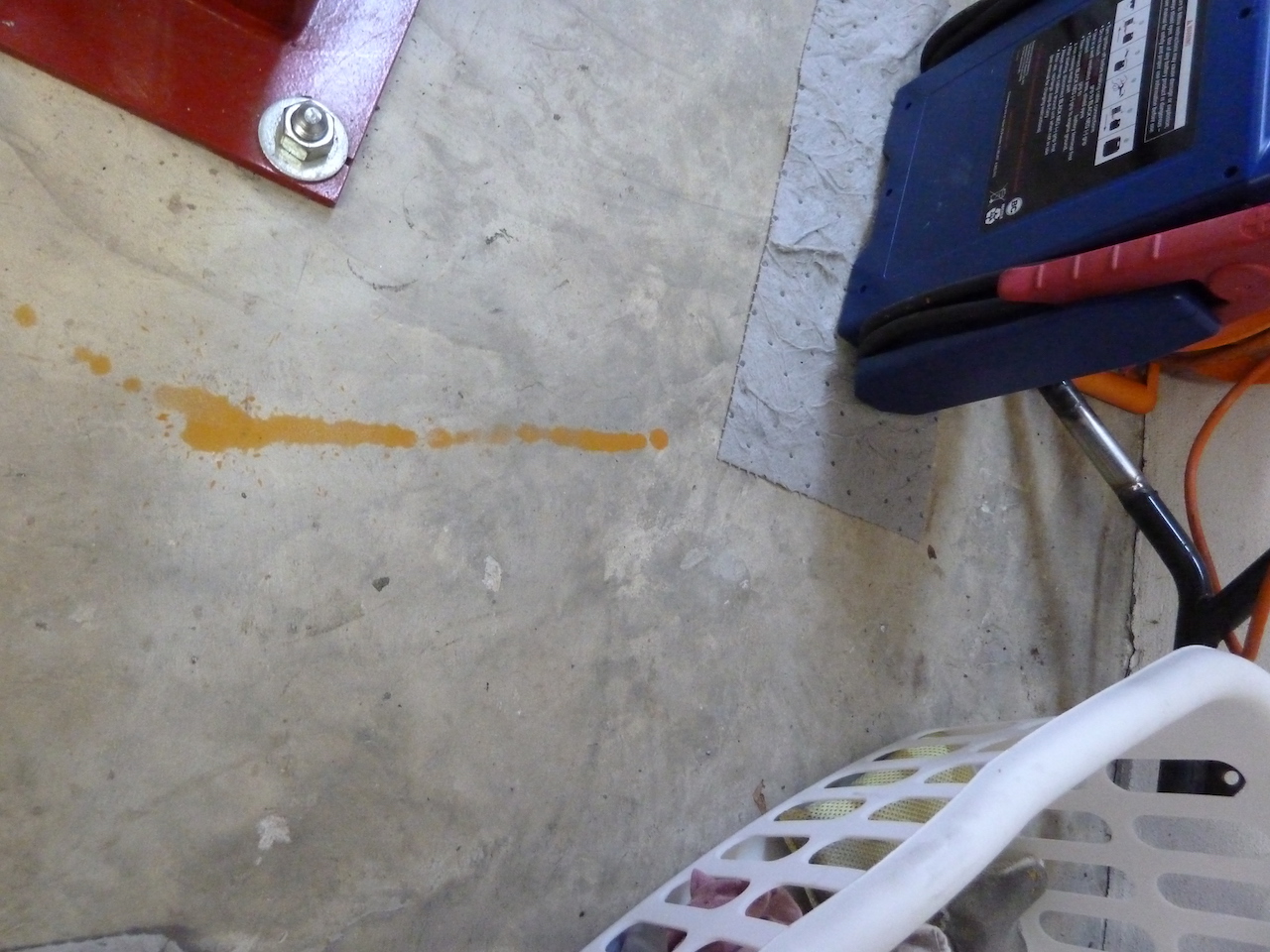 I did manage to get the new starter in. I craftily and carefully wired two flatwashers to the starter's two bolt holes after applying some sticky stuff, thinking I could use these to replace the missing shim. After some time, some more cusswords, two broken lights including my good flashlight, I got it in and cinched down. It looked fine. Then I looked at the floor where the second broken light lay, and lo! and behold! There was the upper bolt hole washer - you can see it plainly near the bottom of the photo, on the floor: 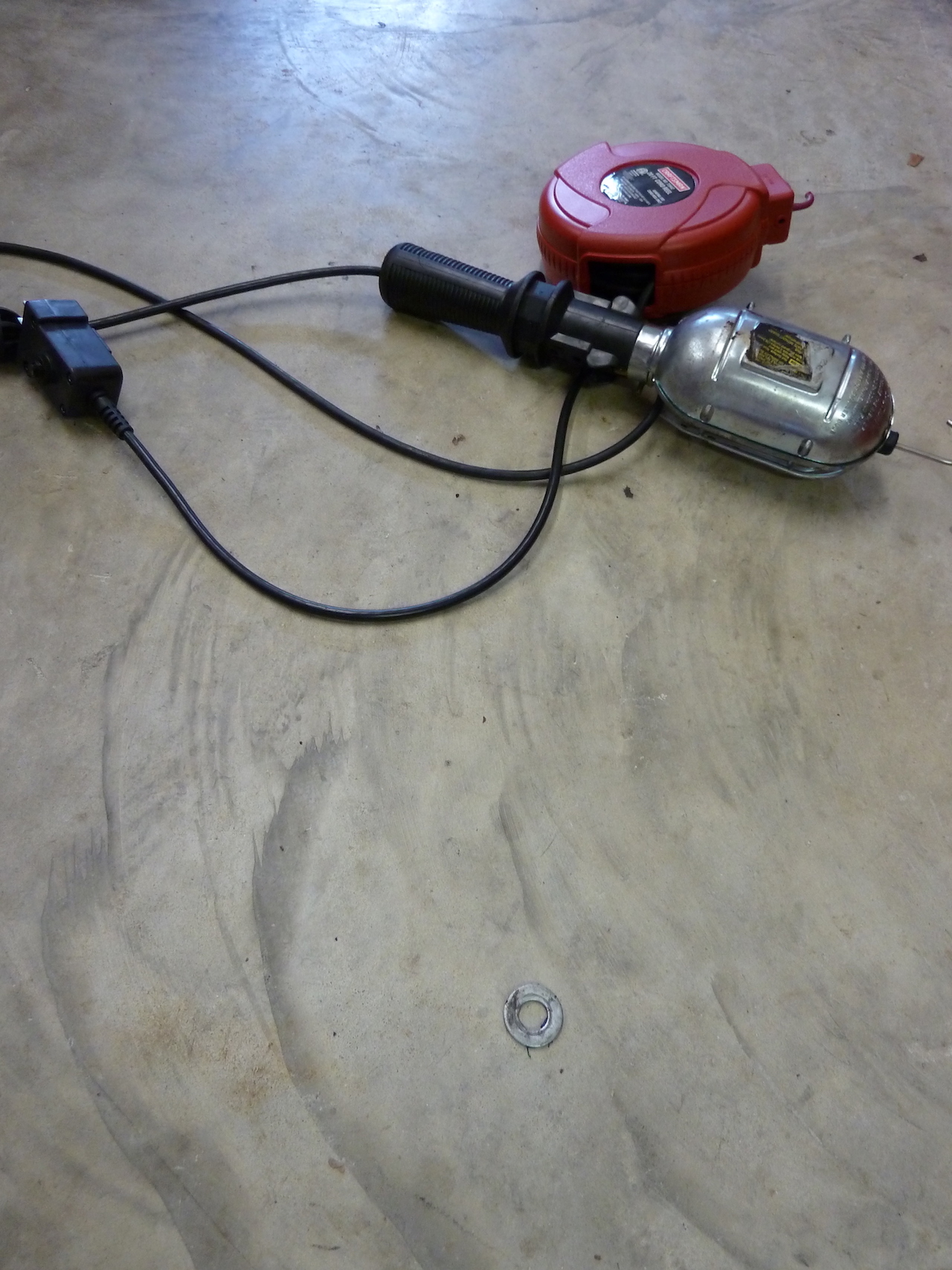 At his point it was nearly 11AM and I thought OK, no more time. I tried the new - slightly crookedly mounted - starter, and it worked. I shut off the engine and tried it again, and it worked again. I decided two out of two was good enough for me (and the Zephyr too) so I left the garage a shambles and took off for Kannapolis.

Happily, the starter made every start there and back although there was a tense moment for me each time I turned the key. Bottom line: we got there early and enjoyed the show thoroughly: 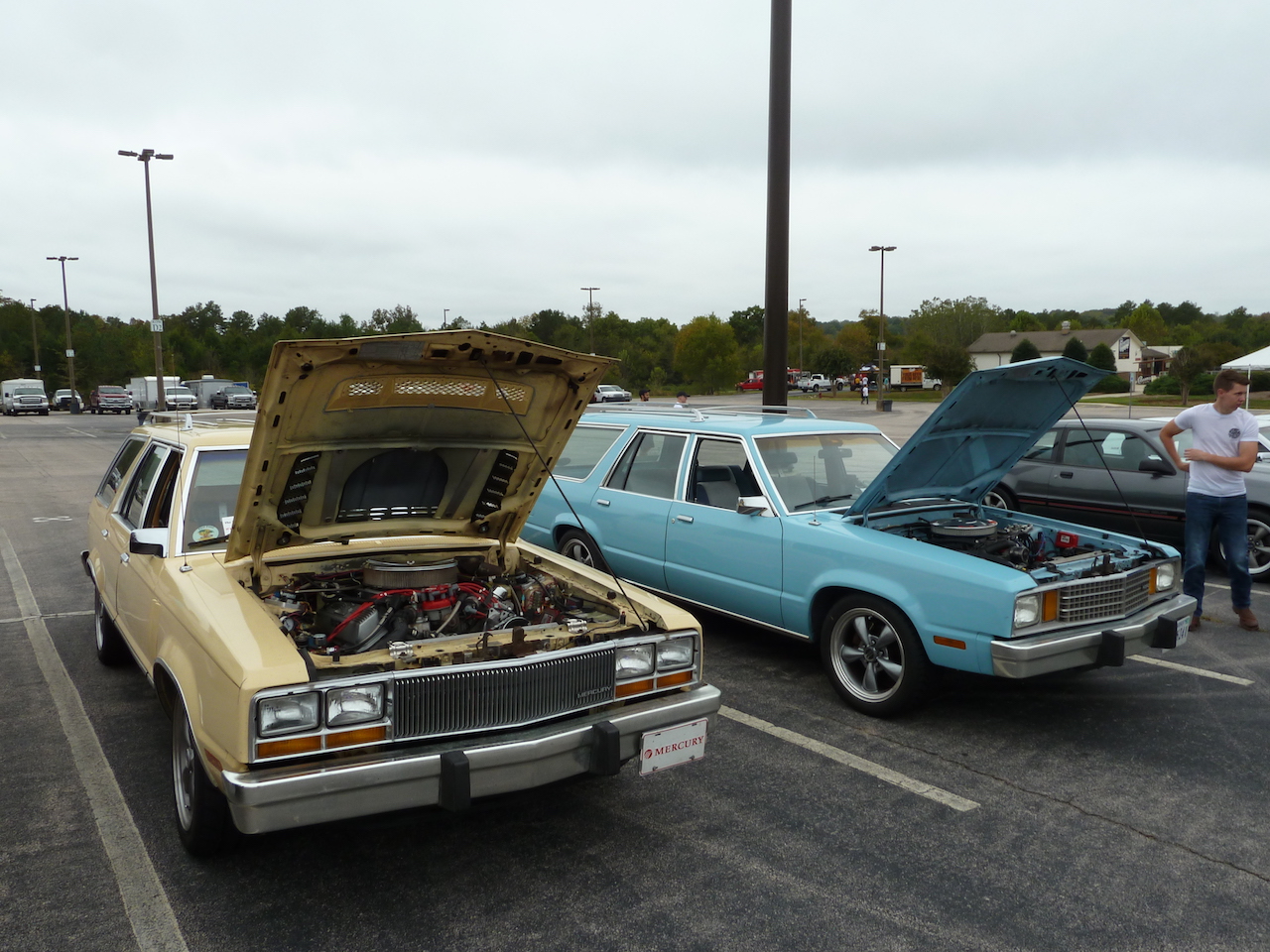 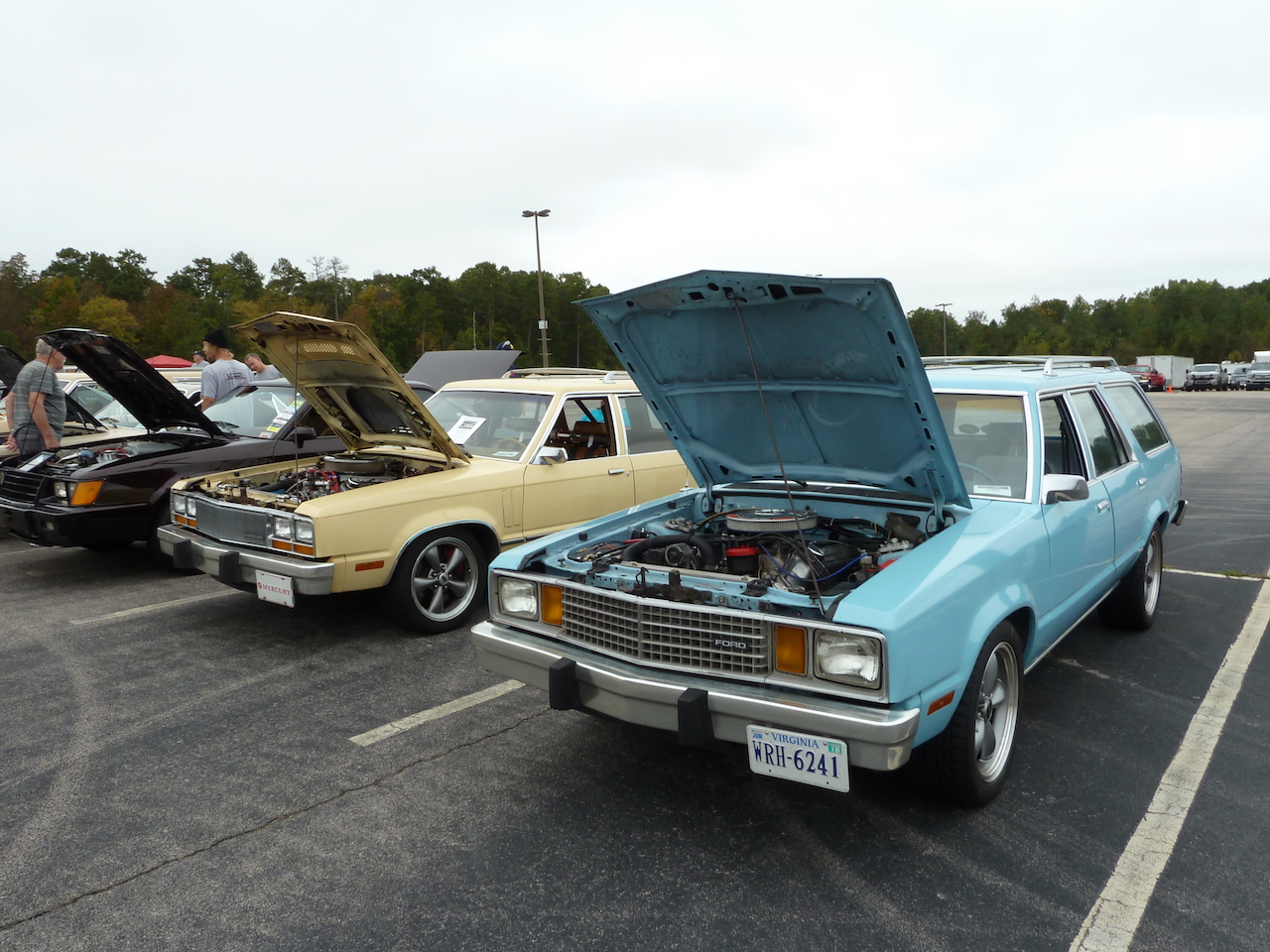 There were at least six Fox platform wagons at the show. Here are five even if they are a little hard to pick out of the lineup: 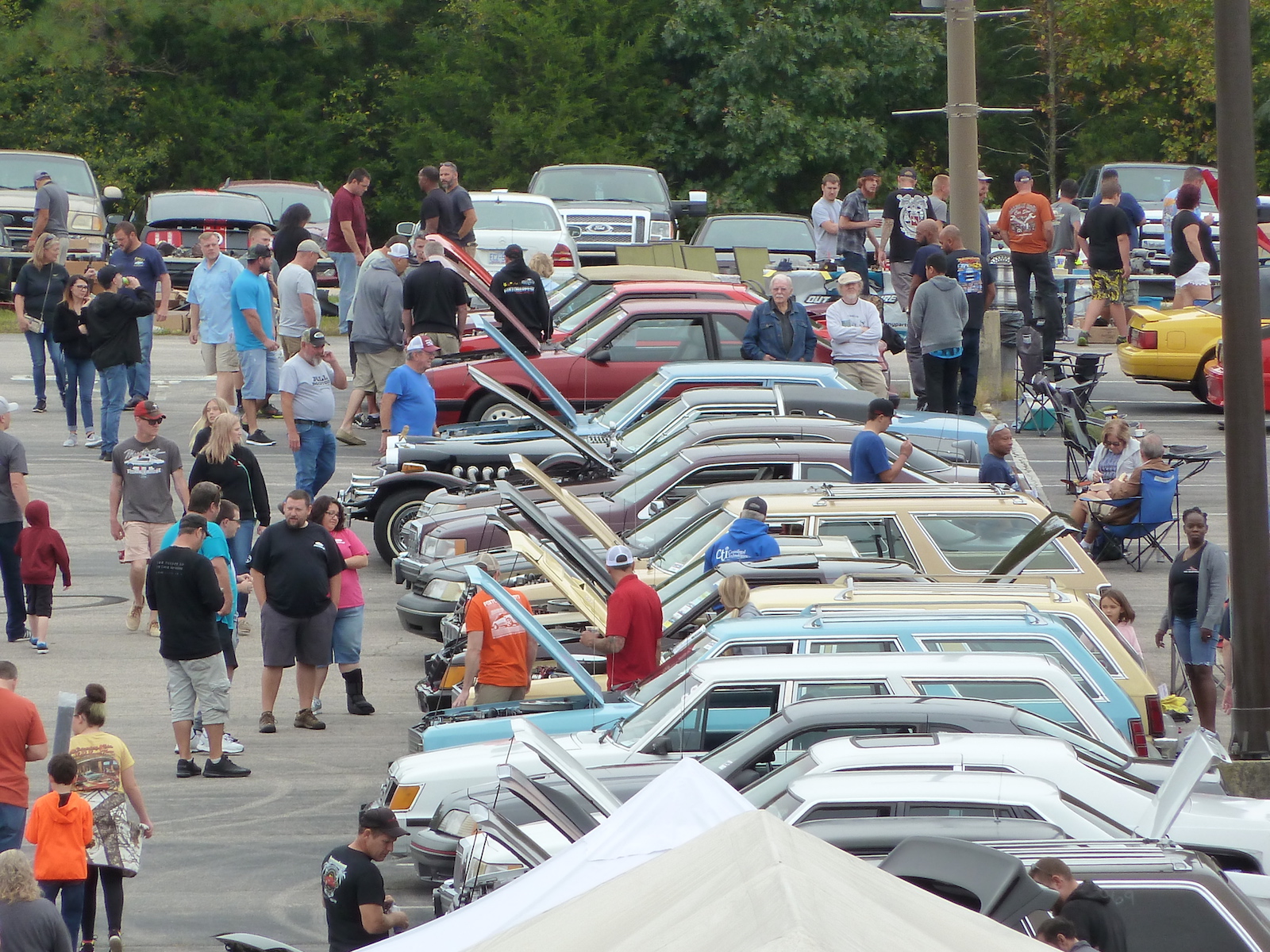 Here are two more shots including another Zephyr: 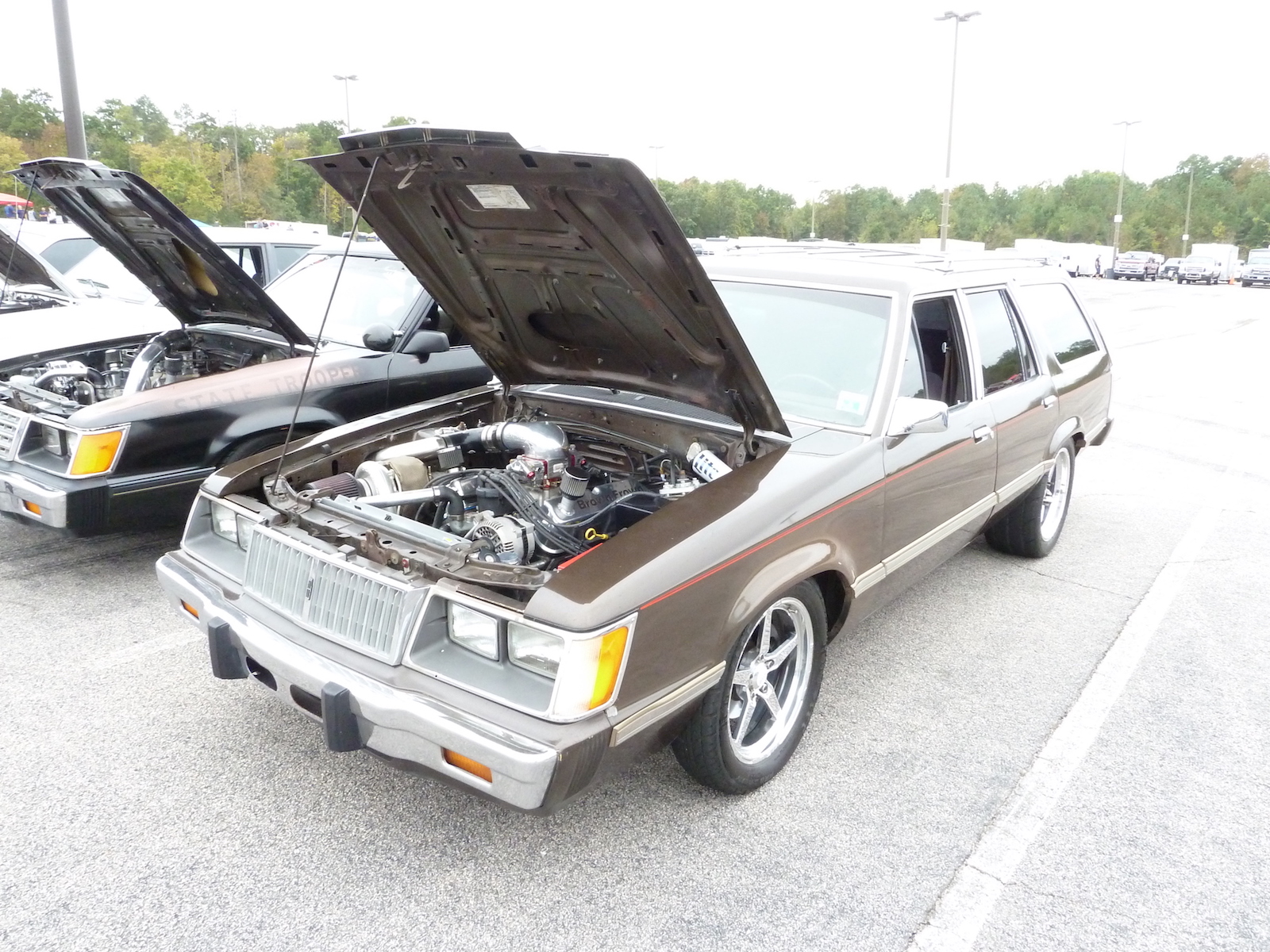 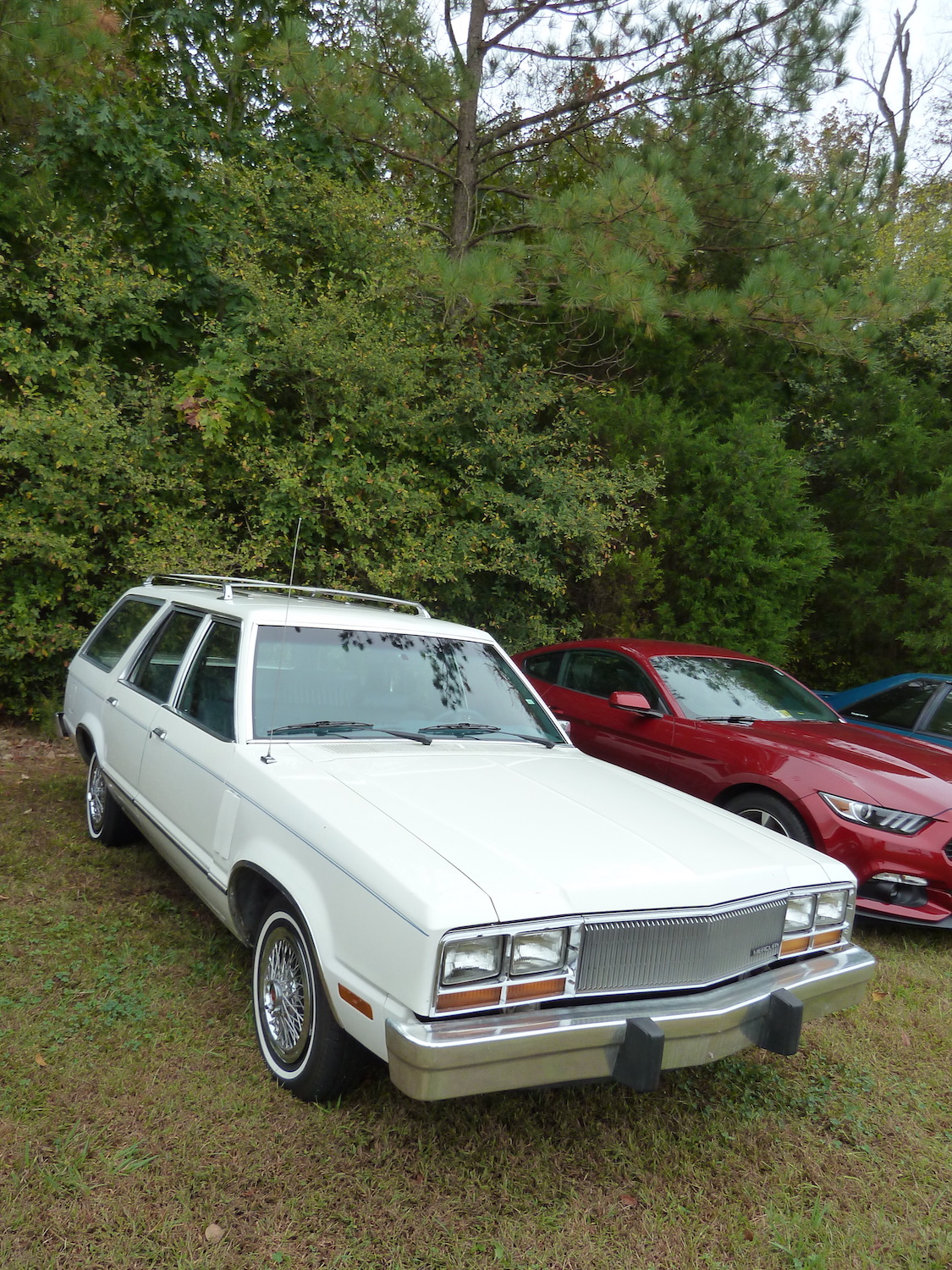 It was a pretty big show. Their estimate was 550+ Fox platform cars and that may have been correct. They are going to to a better count from some of the drone photos and post it on their web site.

Here's a shot taken from the top of the building (a whole two stories up): 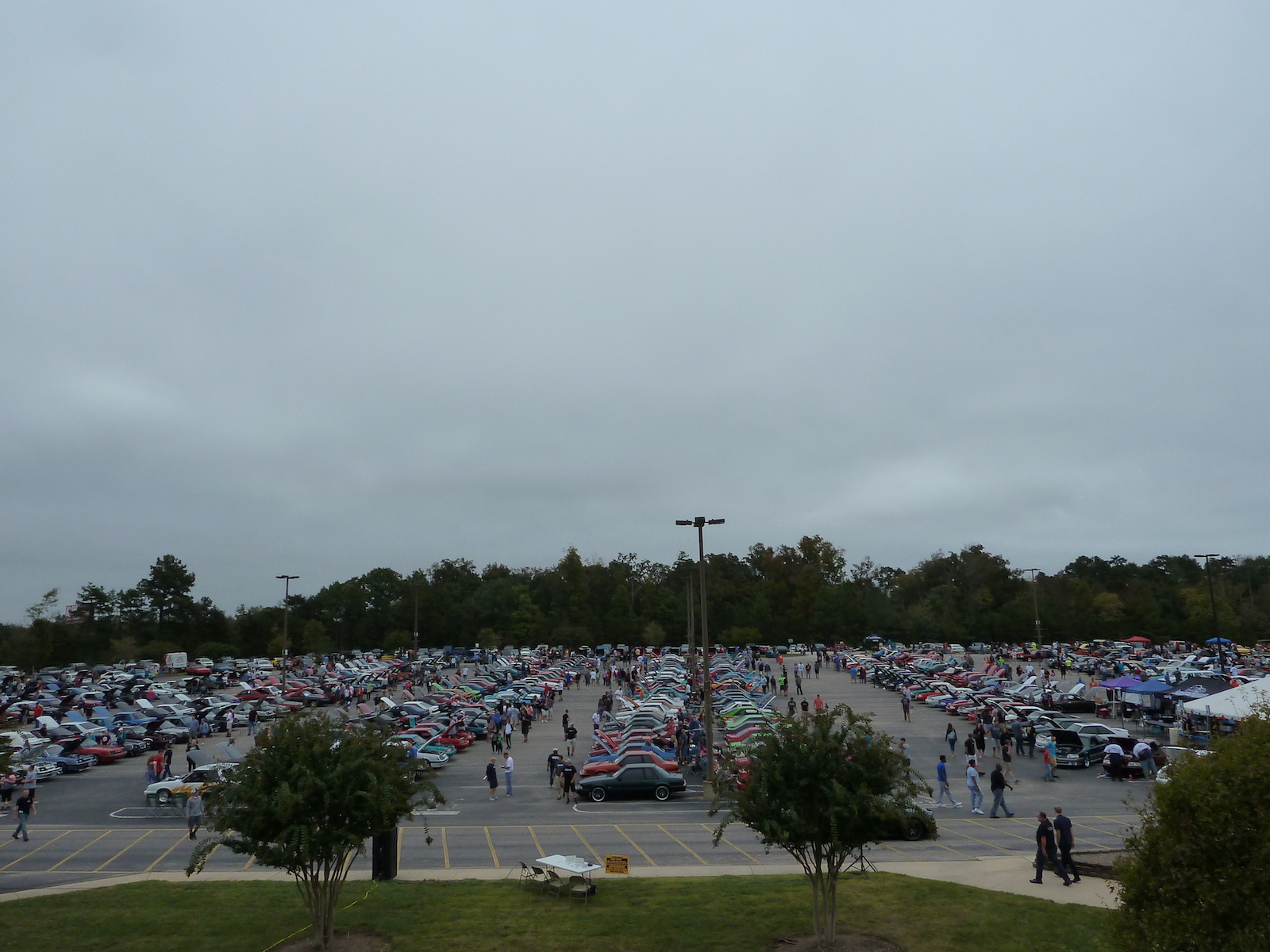 That didn't take in the entire show, but it gives a good idea of how many cars were there.

A side note: Mike, the guy I bought the wagon from was there - I don't remember exactly when I got it, but it must have been some time in 2009. Mike parked his black car right next to the wagon. He recognized the car; I didn't recognize him because we never met - his father conducted the transaction. One of life's little coincidences... 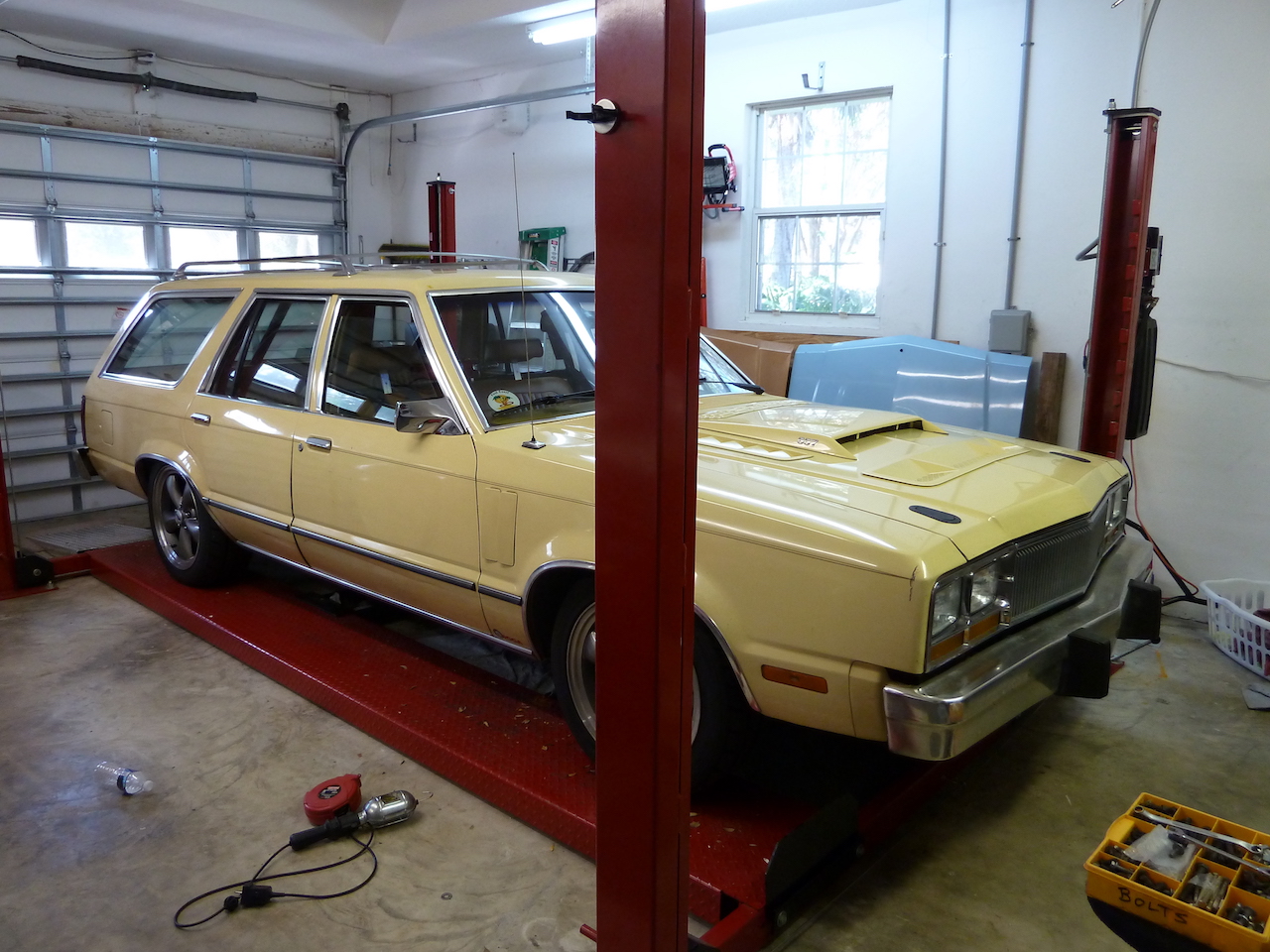 And, uh, me too. Cleanup and redo for the starter begins tomorrow!
Top

Was yours the only wagon with a big block? Funny that the Zephyr's PO parked right next to you.

I only saw one other big block car, and it was a Mustang, not a wagon. There may have been one or two others that I failed to spot.

BTW, I forgot to mention the bottom bolt (one of the two that hold the starter on) stripped when I put the new starter in. Being out of time, I cross-threaded a metric bolt into the hole. Haven't taken it out yet - waiting on the correct size drill bit for the Helicoil to do that.

Clearly a situation where one does not even think "what else could go wrong..."

I think he parked there on purpose. He loudly announced to everyone all day that he sold that car to me. Kinda irked me a trifle, not sure why.

Sorry I missed the Stefan meeting. Maybe when the parts come in?