As described under the TNIA thread in the Cobra Stuff forum, the Zephyr didn't make it to the track.

The first and most obvious diagnosis led me to think the oil pressure gauge line had a hole rubbed in it while chafing against the firewall. I was disappointed I hadn't placed my usual split rubber hose protector secured with zip-ties.

So we went the next day, plugged the hole and set out for the house. There was smoke for the first few minutes while the rest of the oil from the ruptured gauge line burned off the header. I thought, OK, we were right and we'll have a simple, quick fix.

Further along toward the house, the smoke started to return, and this time it smelled like burning plastic or rubber unlike the earlier smoke which smelled like oil.

Putting the car on the lift revealed (after a brief inspection) that the driver's side motor mount failed. Because the engine then rotated toward the driver's side, and dropped down a little bit, probably causing the oil pressure gauge line to push against the firewall and create the hole in the 4AN braided steel wrapped line. The driver's side engine mount's rubber insulator had sheared loose from the metal plates and rotated maybe 45 degrees and slid partly out until it got against the header - that dislocation caused the second smoke attack that clearly was rubber burning.

New motor mounts are supposed to arrive from Summit by the end of the day Tuesday, so between now and then I'm going to try to get the old mounts out and see if there's any other worries. Sigh...

I'm going to use the Harbor Freight Engine Support Bar that I used a few years ago to hold the engine while we dropped the complete front suspension to replace the pan gaskets. Twice.

The photos below show the mounts, the steering/header interface and the support bar. 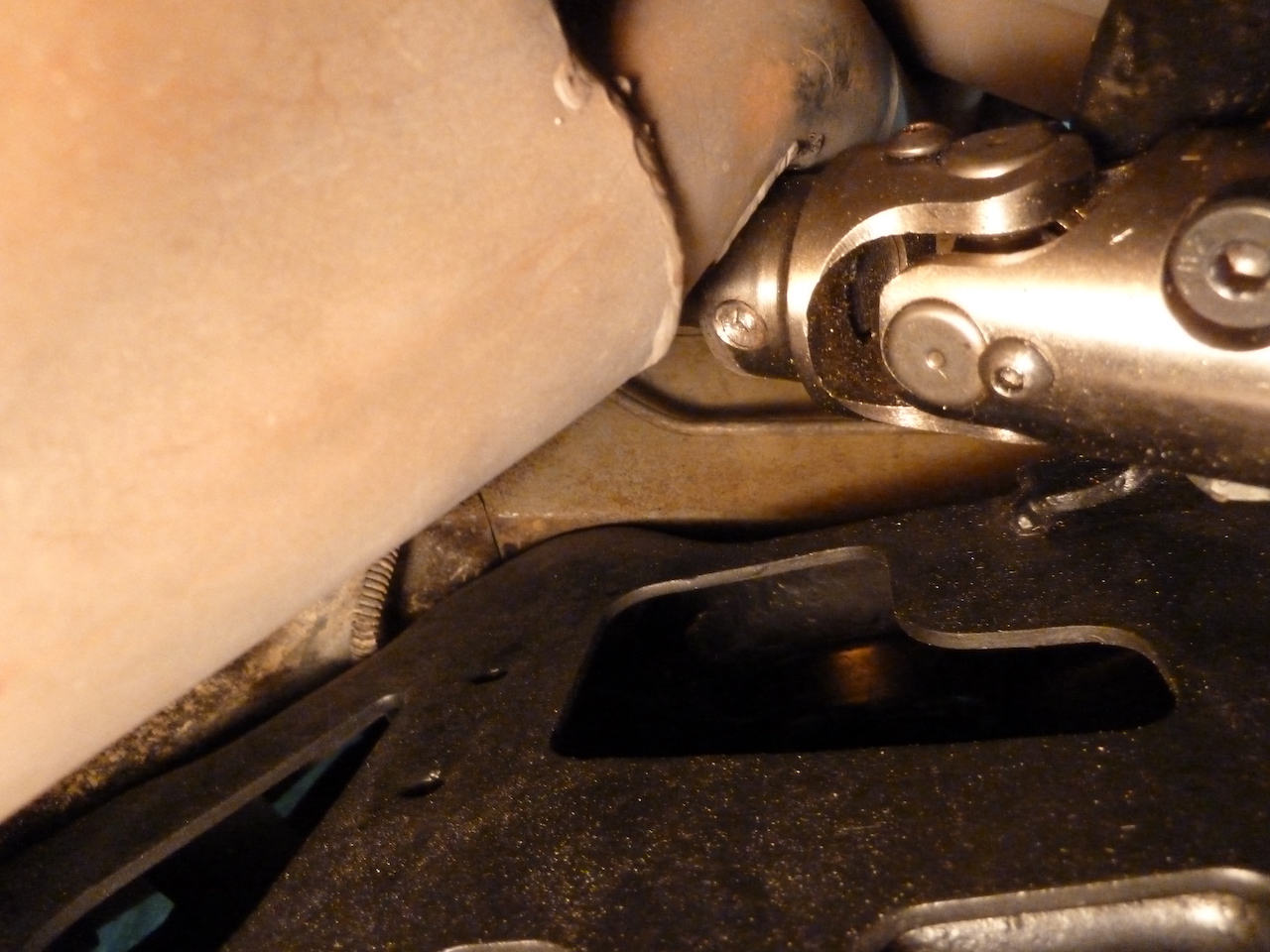 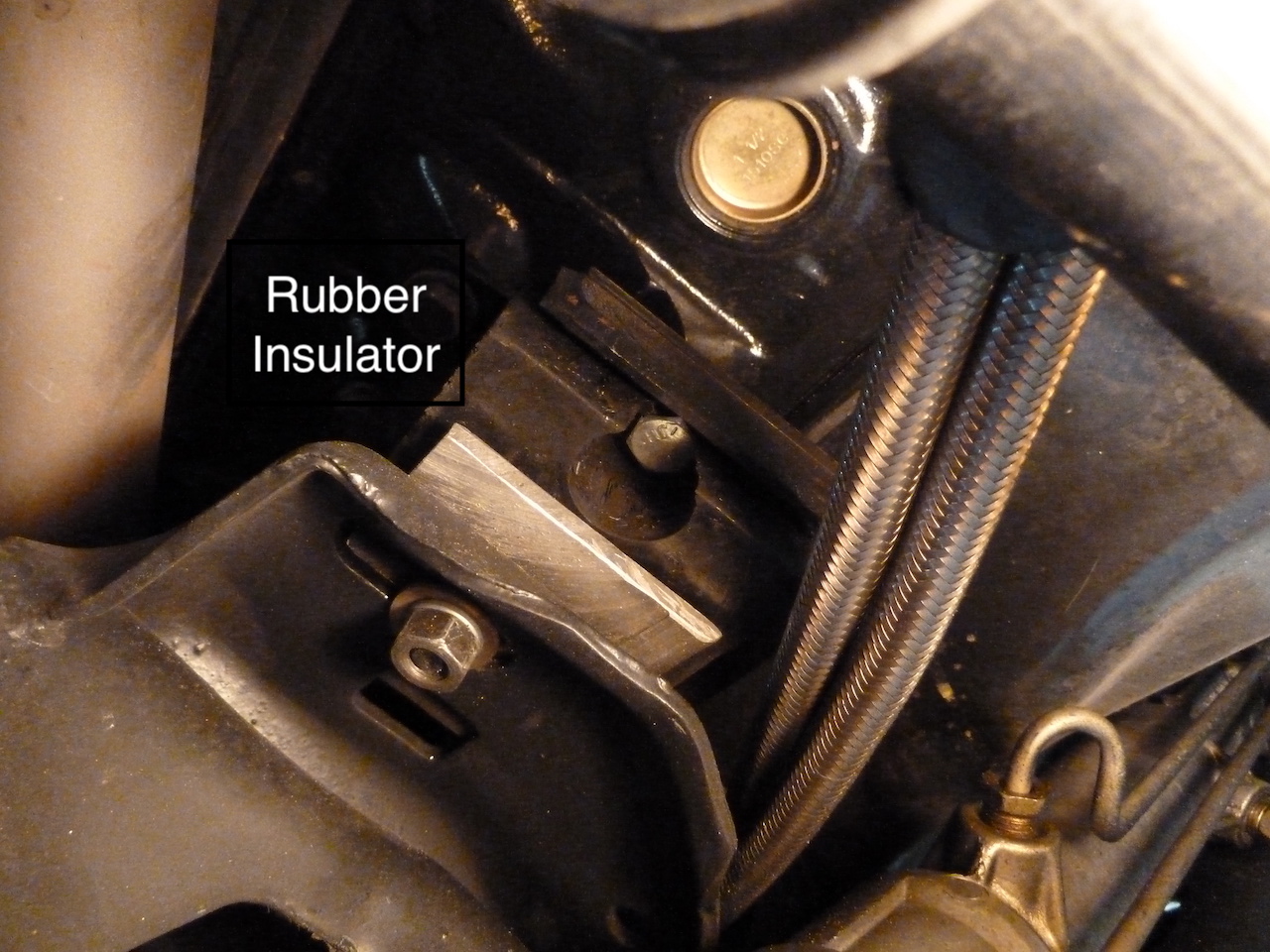 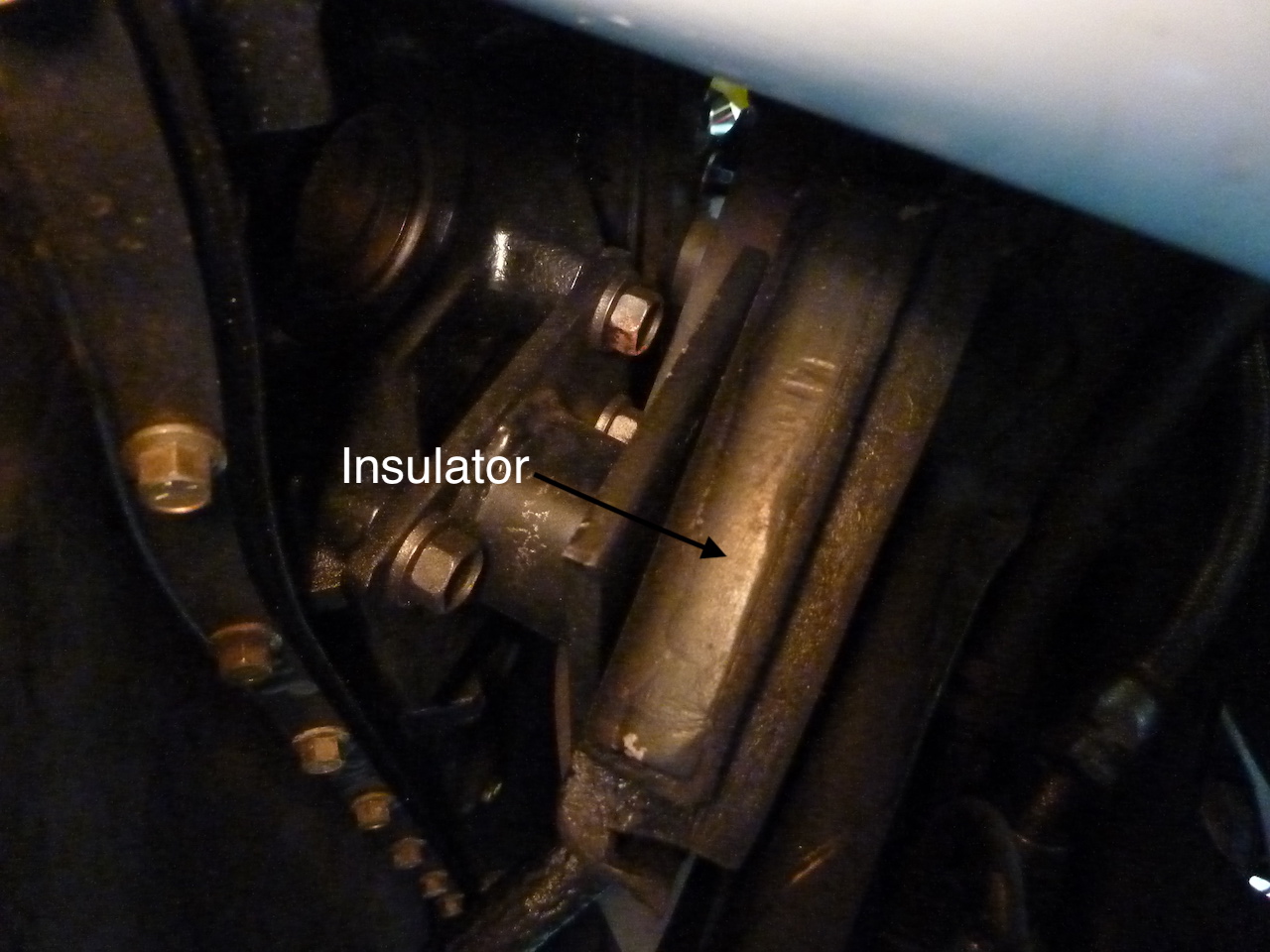 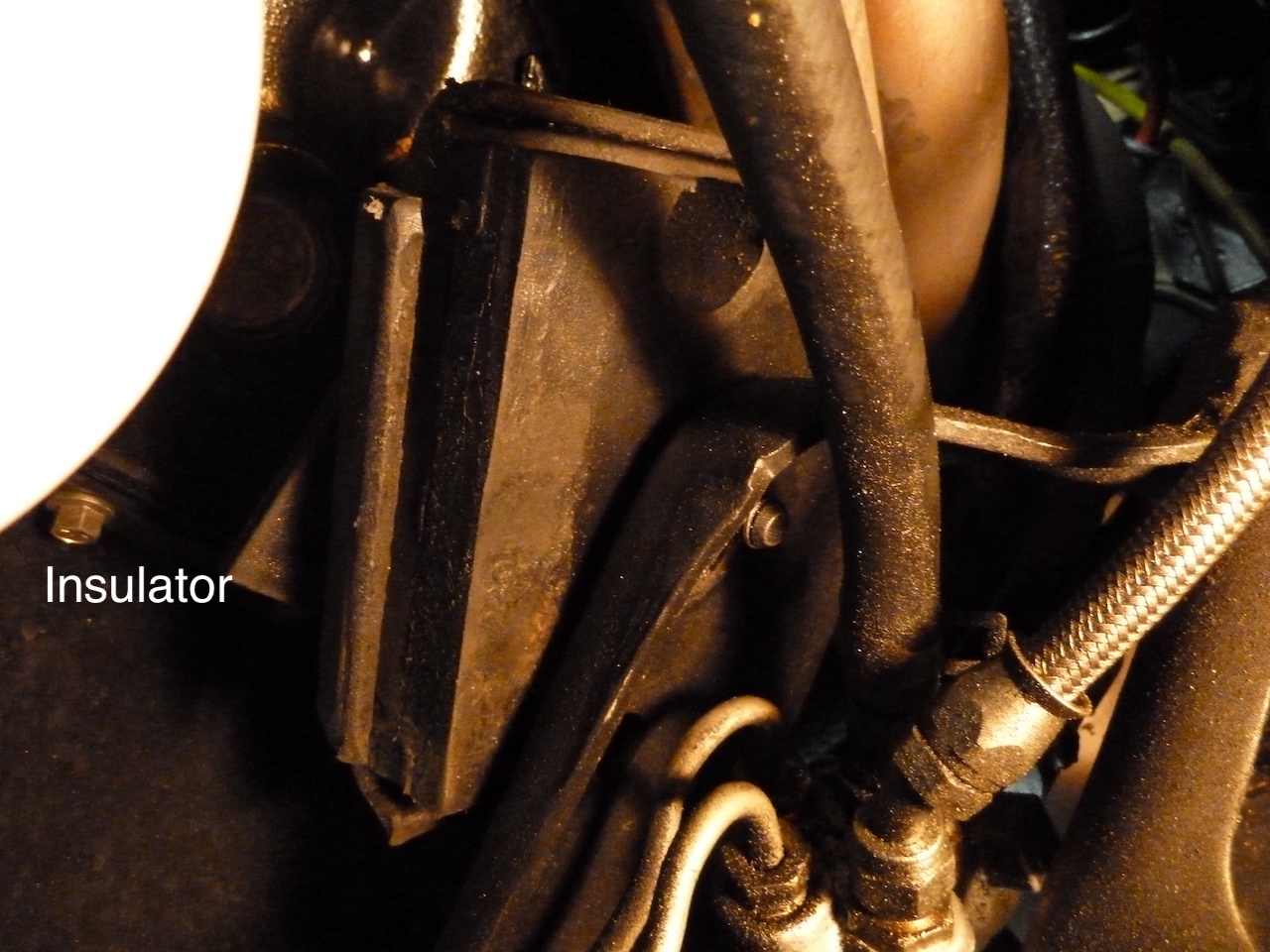 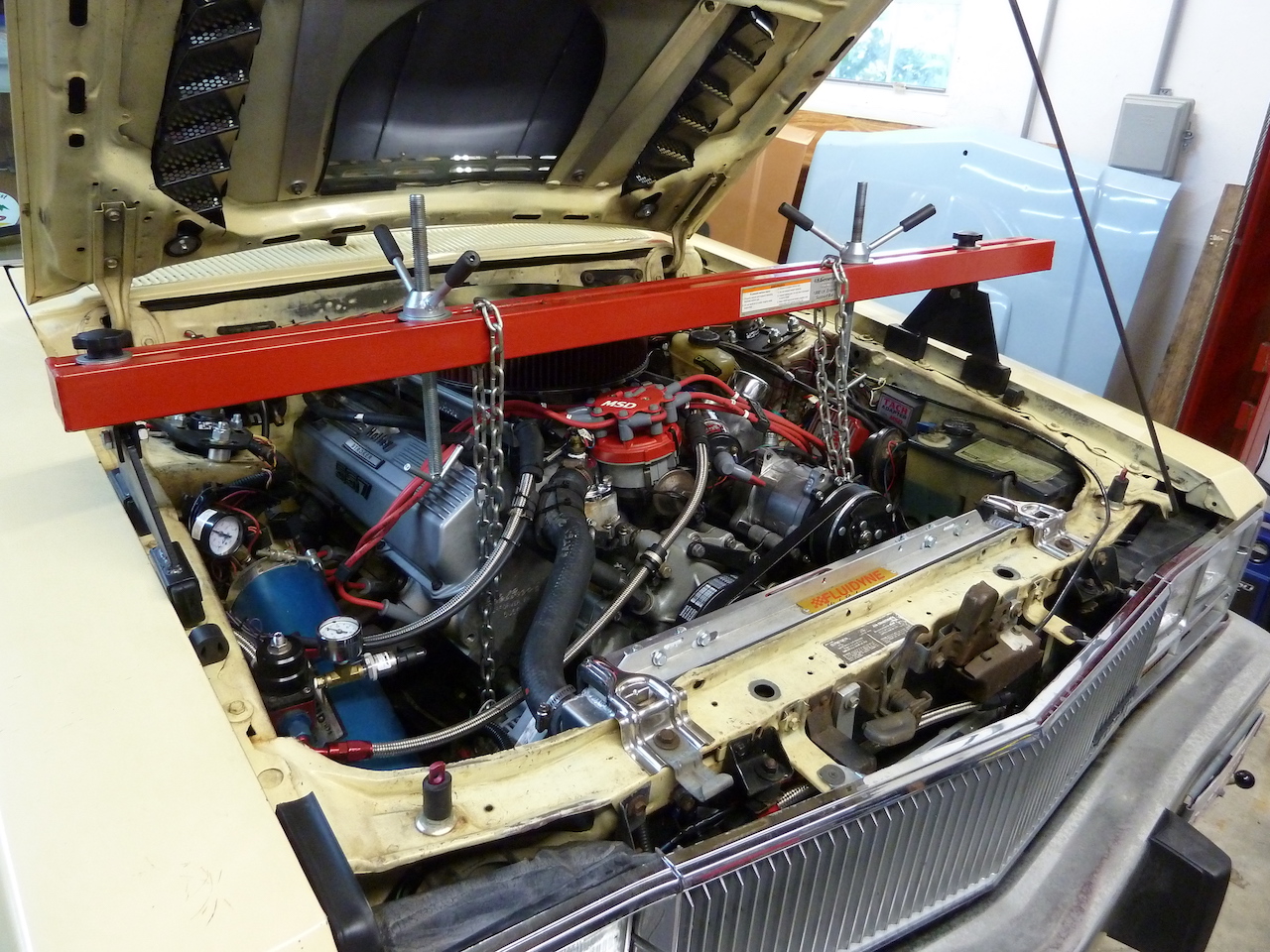 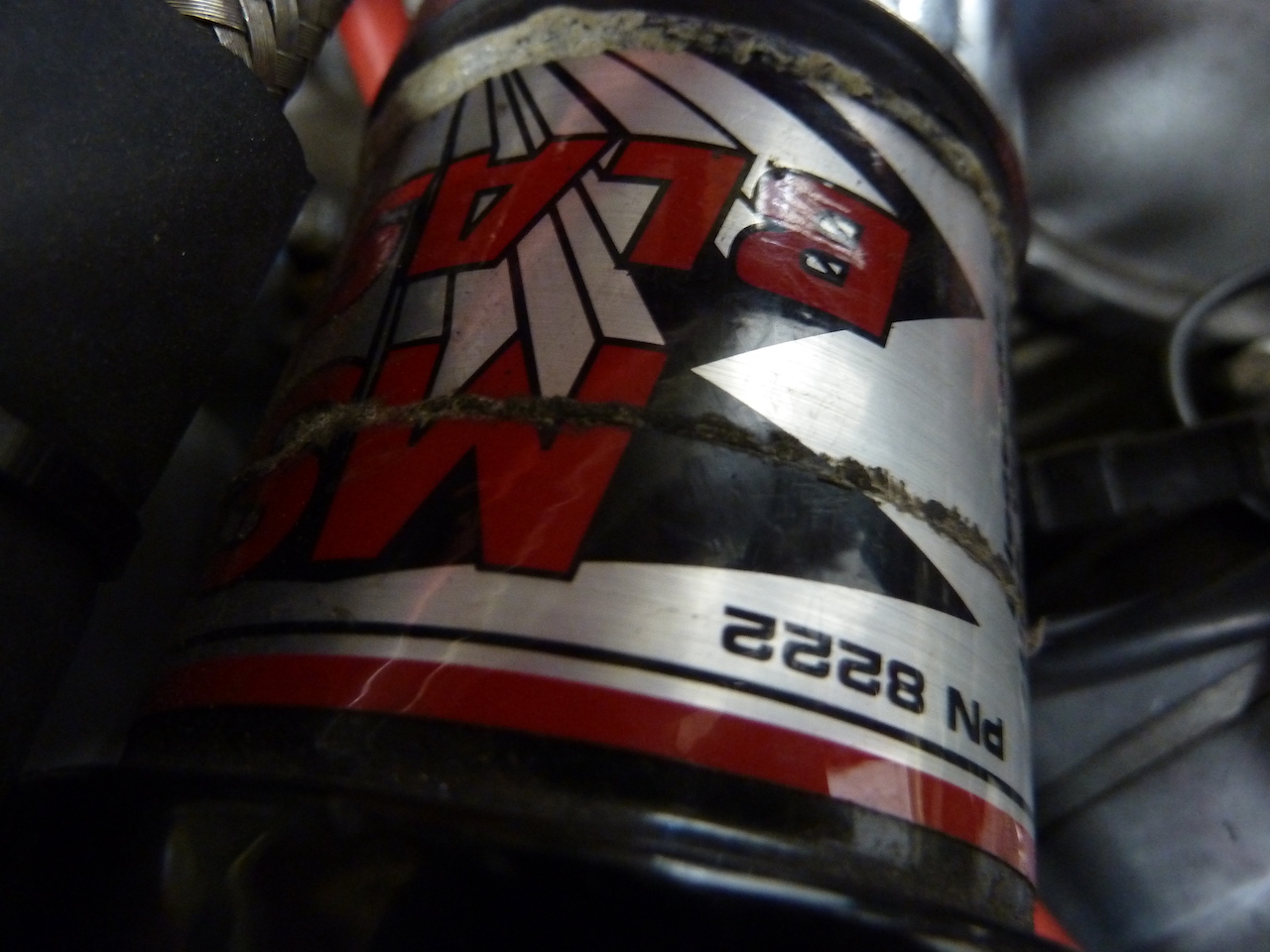 
While nosing around under the hood we noticed the coil seems to have some strange circular corrosion patterns on it, shown in the last photo, so a new coil will go in.

I think that's what tends to happen when you put ten pounds of "stuff" in a five pound bag...

It corrodes your coil???
Top

All of the above, don't cherry-pick...

I think it is just acting out....the Cobra was getting all the attention and it is jealous.

On the plus side..it was good it died on the side of the road....could have been exciding on the high banks what with all the oil and steering issues.
Top

Here's an illustration of the problem with the driver's side motormount: 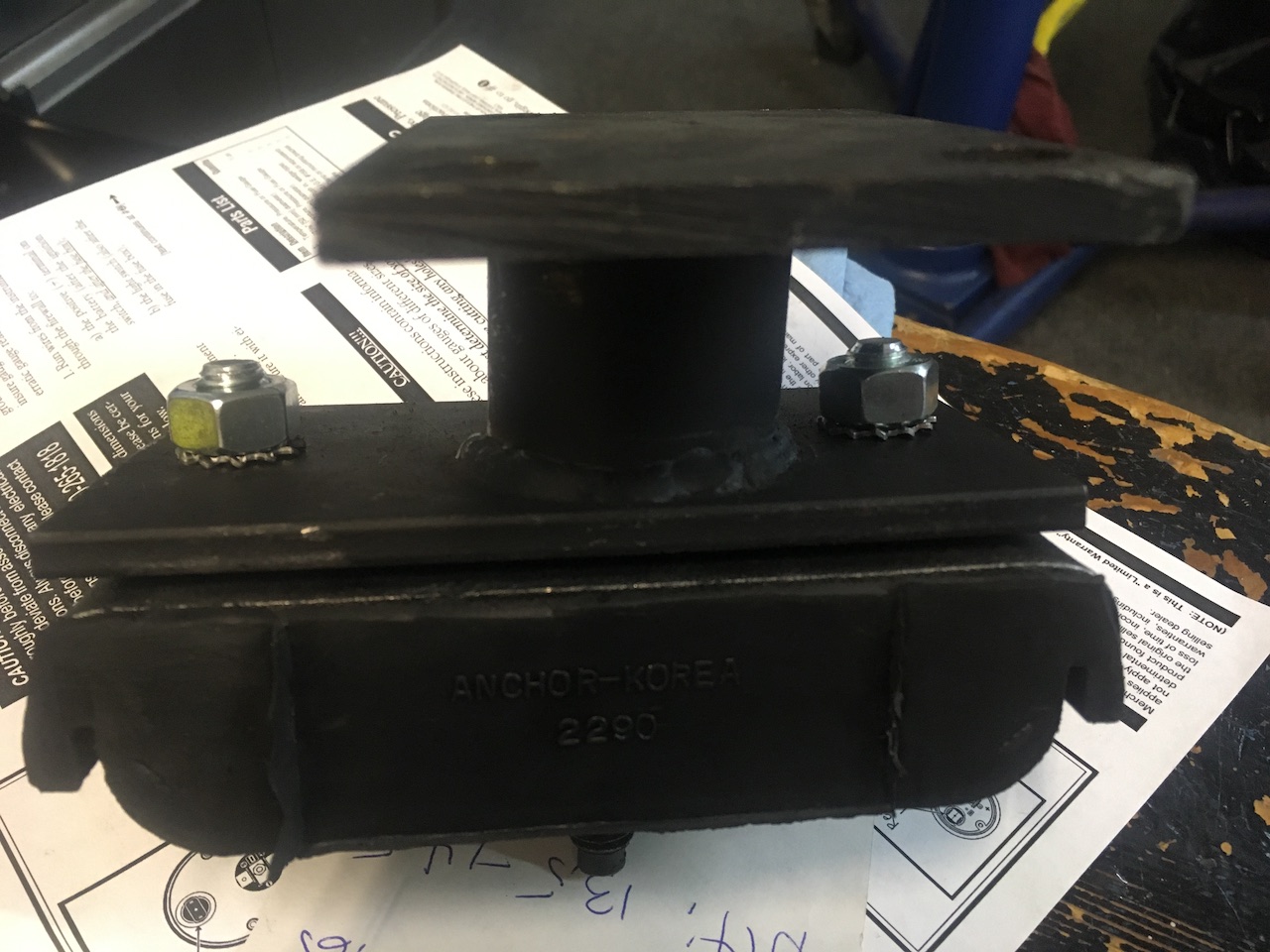 The two bolts holding the insulator to the bracket had vanished along with their split washers and nuts. The single nut at the bottom goes into a slot in the chassis bracket. Its nut and split washer had also disappeared.

As can be seen, I used star washers (and blue Loctite which is harder to see...) everywhere.

All the bolts and nuts are started and tomorrow the blue Loctite and tightening happens - I hope!
Top

So, no other damage resulting from the failed mount? Nice...

Never so lucky as to avoid side effects. There are at least 5 related problems I need to go after:

- new 3 or 4AN line for the oil pressure gauge
- dipstick tube is slightly bent and leaking
- still don't know what was burning with plastic/rubber smell; thought it was the motor mount but now not so sure

- alternator may be bad? Voltage drops to 11 after about ten minutes - maybe when fans come on? Bad ground?
- Coil weirdly corroded - need to replace
- power steering cooler hose clamp replacement, probably 8 or 10 of them - some kinda hard to get to

I did get the mounts correctly in place yesterday. That was origami played out in steel and rubber.

Today will be a success if I can get 6 bolts and two nuts properly Loctited and tightened. Some of them of course can't be seen - only felt...

Ouch, guess I shouldn't have assumed no damage since you didn't previously mention anything.

Been pounding along with the Z; here's what's done:

- New 1/2" clamps on all PS hoses. Spring clamps leak (but everyone else except yrs truly probably knew that...) Some were totally impossible to reach.
- Engine oil back to proper level. Maybe overfilling the pan caused the dipstick leak. Probably not but we'll hope...
- New motormounts both sides, blue Loctite and star washers on every fastener. Guess what's now added to the pre-track-day check list?
- Auto trans modulator vacuum line seems ok; all connections checked.
- New oil pressure gauge line in place, waiting for fittings from McMaster Carr for the sender.
- Coil replaced

When the oil gauge is connected I'll probably test the thing. Fingers crossed.

Still puzzling over the voltage decrease after 5-10 minutes running. If the thing will run properly, I'll wait 'til it gets warmed up and the voltage drops, then check it at the alternator.
Top
Post Reply
11 posts